You Really Can’t Make This Stuff Up 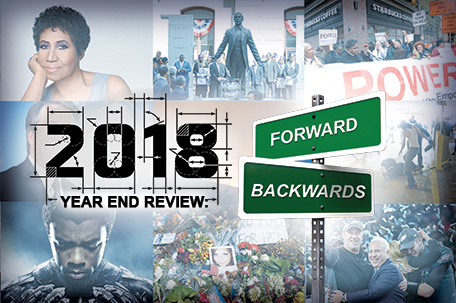 Thanks to the shenanigans of 2018, many of us found ourselves saying this phrase a lot.

Although I’m a diabetic and I probably shouldn’t, I’d like to propose a toast to the end of 2018 and use a nice sweetened beverage like a can of Coca-Cola or a 32-oz fountain drink from Wawa to do it with.

Why? Because there’s nothing that illustrates the power of bad information on the decision-making processes of Americans than the way that a whole lot of folks who should actually know better have conducted themselves over the City of Philadelphia’s Sweetened Beverage Tax.

Because a bunch of beverage distributors, a prominent grocery store chain operator, and a politician who hopes to ride this issue into the Mayor’s Office have managed to convince a whole lot of people who should actually know better that it’s more important to make sure that poor folks can continue to get sugar related illnesses (and keep these distributors from not making customers help them pay a tax that they and they alone are supposed to be responsible for), than it is to make sure that the city has new playgrounds, better schools and other things that might, well, I don’t know, keep folks from killing each other.

So the range of bad information, which includes a lack of understanding of why the tax is in the general fund and not in its own account and the so-called tax related unemployment that we haven’t been able to get independent numbers for, has been running through the city like a mighty stream.

(The tax is in the general fund because that’s the account the city uses to pay its bills, by the way. The bond that pays for Rebuild, Universal Pre-K and Community Schools is a bill. This is the end of my TED Talk.)

Bad information, and in some cases out and out lies, were the coin of the realm in 2018. From local stuff like the Sweetened Beverage Tax to just about anything coming out of the White House, it’s hard to know what the straight scoop is about, well, anything.

And let’s face it, were it up to the folks in the White House, putting those whose job it is to refute the lie in jail for their trouble isn’t completely off the table.

Because America in general, and Pennsylvania in particular, refuses to even discuss the possibility of cutting down on the number of guns in our country, a lot of places that should be considered safe weren’t in 2018. Synagogues, schools, outdoor concerts and just about anywhere else became places where people got shot.

And this is even before we get into the fact that Philadelphia has once again become the City of Brotherly Love and Put The Damned Gun Down.

But while this was the Year Of Bad Information, 2018 wasn’t totally hopeless.

Thanks to some healthy Midterm election turnout numbers, the system of checks and balances that has kept America from becoming a total Banana Republic since its inception is about to make a comeback. An Avenger showed Hollywood that not only do people of color go to the movies, but if you make a good movie featuring them, everyone will go and see it.

But we had some pretty big losses this year. The Queen Of Soul is gone. So is Laverne DeFazio. The author of “The Princess Bride” left us. So did the father of The Avengers. We lost presidents, first ladies, and one of the world’s foremost scientists. But we also lost Judge Harold T. Stone, Edna Garrett and the head of the “Cathouse”.

We also learned that there’s a whole gang of stuff you can’t do while Black…including wait for a business partner at Starbucks, get mad at being mistreated during an athletic contest, or cash your paycheck.

Here’s a rundown of a year that will probably still not make any sense two years from now.

“If Your Mama Says She Loves You…

…have it verified by at least three sources.

My late news writing teacher Ed McFall gave me this rule to live by regarding sources when I was just learning the business, and I don’t think it’s made more sense at any other time than in 2018.

I say this because the Year Of Bad Information swiftly turned into the Year Of The Scammer. True scammers like some of the folks that made their presence felt in 2018 could only do their best work with the help of a populace willing to accept their misinformation without question.

No one personified that level of scamalishousness (Yeah, I know that’s not a word, but bear with me here) quite like the Scammer-In-Chief, President Donald Trump. As a real estate mogul in New York, his willingness to use other people’s money to do whatever he could to enrich himself and his family was kind of legendary.

As president, however, he’s kicked it up a notch. And a lot of what he’s done has come out in the form of indictments coming out of Special Counsel Robert Mueller’s office and the offices of the Justice Department’s Southern District of New York.

Former National Security Adviser Michael Flynn is probably spending his last New Year’s Eve of freedom, thanks to a guilty plea to lying to the FBI about his contacts with the Russian government and several interview sessions with Mueller. The former Lt. General was scheduled to be sentenced by U.S. District Court Judge Emmet Sullivan, but when Sullivan read the redacted parts of Flynn’s testimony, he asked the government’s lawyers why a treason charge hadn’t been filed.

He also told Flynn that if he wanted to jail time, he’d better tell Mueller a lot more stuff.

Former Trump campaign manager Paul Manafort, a man of wealth and taste procured through a combination of tax evasion and a lot of work with, you guessed it, the Russians, took his chances in court and lost in Virginia. He decided that fighting the charges of tax evasion and other offenses in D.C. might not be the best course of action, so he decided to talk to Mueller.

When Muller found out he was lying, he ripped up his deal. So things might get interesting for him.

But the most interesting plea deal came from Michael Cohen, Trump’s former fixer who had one time promised to “take a bullet” for the president.

He decided that bullets hurt and that he didn’t need those problems, instead.

The man who paid off adult film actress Stormy Daniels, a woman who told us entirely too much about the president, decided to take a plea and to talk to Muller about Trump’s Russia ties and the Trump Tower with the Putin Penthouse that the president had been less than honest about for a while now.

While the president has been less than honest with the American public, including a base that believes his every word despite how many Pinocchios the Washington Post puts beside it, the press has been trying to get the truth out, something that’s led to some Constitutional conflicts.

CNN reporter Jim Acosta got his White House hard pass taken away when he refused to cede the microphone during a press conference with President Trump, in which the president said Acosta shouldn’t be working for the network. When a lawsuit was filed against the White House and a judge issued an injunction giving Acosta’s pass back, Trump backed down. American Urban Radio Networks reporter April Ryan also continued to be a target for the White House.

But what prompted Time Magazine to name journalists their “Persons Of The Year” were the journalists who literally lost their lives trying to tell the story. The Capital Gazette newspaper in Annapolis, Maryland was the scene of a shooting where five of the newspaper’s employees were killed. Jamal Khashoggi, a Washington Post columnist, was killed by Saudi nationals when he came to Turkey to sign some paperwork related to his upcoming marriage.

In true Trump fashion, he had to be shamed into denouncing Khashoggi’s murder.

But not to be outdone, the Delaware Valley had its own special brand of scammers.

The story began when homeless veteran Johnny Bobbitt Jr. gave Katelyn McClure his last $20 when she ran out of gas. In return for his kindness, McClure and her fiancé, Mark D’Amico, started a GoFund Me account to raise money to help him.

Fourteen thousand donors, $400,000, a lawsuit, and several arrests later, it was discovered that Bobbitt, McClure and D’Amico had actually hatched this plan together and the only reason that it fell apart was because McClure and D’Amico allegedly spent the money on trips, shopping, and other luxuries without giving Bobbitt his cut.

Let’s start this section with a number: 51 percent.

That, believe it or not, was the final turnout numbers for the City of Philadelphia in the 2018 Midterm Elections. Thanks to some serious voter turnout work from a combination of grassroots community groups and political activists, folks made sure their political voices were heard in November.

The results in Pennsylvania were a harbinger of many of the results that happened for Democrats nationwide.

For most of the last two years, people who believed that President Trump was basically using the Constitution as a dishrag while Congressional Republicans looked the other way were waiting for the 2018 Midterms.

They believed that if at least one of the branches of Congress were controlled by Democrats, Trump wouldn’t be able to continue to run completely amok.

Thanks to a successful Midterm election mobilization, we’ll know if that’s what happens come January.

Congress will feature a number of new faces, many of them women of color and some of them making history.  New York’s Alexandria Ocasio-Cortes led the charge when she defeated Joe Crowley, a member of the Democratic leadership in Washington, in the New York primary, becoming the youngest person in Congress.

Black women also made inroads in New England when Ayana Pressley and former “Teacher of the Year” Jahana Hayes became the first Black woman to represent Massachusetts and Connecticut respectively.

Deb Haaland of New Mexico and Sharice Davids of Kansas became the first Native American women to go to Congress. Davids, a lawyer who is also a mixed-martial arts fighter, also became the first member of the LGBT community to represent her state.

In state politics, Jared Solis became the first openly gay man to become a governor anywhere in America by winning the governorship of Colorado.

But it wasn’t all joy for Democrats.