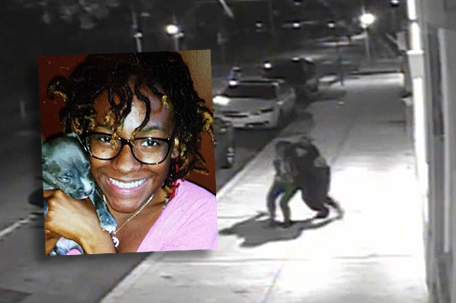 “My understanding is, even after she was in the car and bound, she continued to struggle with this guy,” Charles Ramsey told ABC’s “Good Morning America” on Thursday. “She’s got a lot of fight in her.”

Ramsey said 22-year-old Carlesha Freeland-Gaither is resting at home in Philadelphia after her three-day ordeal.

Carlesha Freeland-Gaither’s relieved relatives said they brought her back to her mother’s home in the city after reuniting late Wednesday at a Maryland hospital.

Police say Freeland-Gaither, who disappeared Sunday night, had some injuries but was generally doing OK.

Ramsey says detectives are giving her time to settle down before completing interviews.

He is being held on an unrelated Virginia warrant alleging attempted murder, assault and malicious injury with acid, explosives or fire.

Law enforcement agents spotted Freeland-Gaither and Barnes in a car with a broken-out back window in Jessup, Maryland. They arrested Barnes after he stepped out of the car.

Keisha Gaither, who a day earlier had sobbed as she pleaded for the safe return of her kidnapped daughter, was smiling as she stood before the microphone at a Philadelphia news conference Wednesday evening.

“I’m taking my baby home. Thank you. Thank you so much,” she said as authorities announced the 22-year-old nursing assistant’s rescue and the arrest of the suspect.

Authorities said there was no indication Freeland-Gaither and the man, who used to live in Philadelphia, knew each other.

Barnes was being held Thursday on an unrelated Virginia warrant alleging attempted capital murder, assault and malicious injury with acid, explosives or fire, and he would face federal charges in the Philadelphia abduction, authorities said. Barnes, 37, couldn’t be reached for comment while in custody.

“No one else is in danger right now because we got a very dangerous predator off the streets,” Police Commissioner Ramsey said.

Authorities credited hard work by law enforcement agents in finding Freeland-Gaither. Bureau of Alcohol, Tobacco, Firearms and Explosives agents had received information from Richmond, Virginia, to be on the lookout for a vehicle that might have been involved in the abduction, said Tim Jones, resident agent in charge with the ATF in Lanham, Maryland.

ATF agents found the vehicle, which had its rear window kicked out, late Wednesday afternoon on a road in Jessup, he said. A witness to Freeland-Gaither’s abduction Sunday night had said she kicked out some of the car’s windows before the car sped off.

Law enforcement officers saw Barnes and Freeland-Gaither in the car and surrounded it, Jones said.

Barnes climbed from the back seat to the front seat, and that was when agents drove their cars around to block his vehicle in, Jones said. Agents then freed Freeland-Gaither, and she was taken to a hospital, Jones said.

Barnes was taken into custody without incident, Jones said.

Freeland-Gaither’s mother, Keisha Gaither, thanked police and the community for their support. She said she had talked to her daughter by phone and her daughter was distraught.

Freeland-Gaither had been last seen on surveillance video being grabbed by a man and pulled toward a car Sunday night as she struggled to get away in Philadelphia’s Germantown neighborhood.

Police and federal authorities had released a stream of images over the past two days from surveillance cameras in Maryland and from a Philadelphia supermarket hours before the abduction.

The video showed a man in a knit cap and dark coat walking down an aisle of a store and using a self-checkout station. A timestamp indicates the video was recorded eight hours before Freeland-Gaither disappeared.

A witness called 911 at about 9:40 PM Sunday and reported seeing a woman identified as Freeland-Gaither screaming for help as she was forced into a dark gray four-door vehicle.

Police said Freeland-Gaither’s glasses and cellphone were dropped on the street, near piles of broken auto glass.

The witness said Freeland-Gaither – described by her parents as easygoing until she’s threatened – had broken the car’s rear side windows.

Freeland-Gaither, a nursing assistant, graduated from high school in Maryland and lived with her grandfather in Philadelphia until a couple of months ago, when she moved in with her boyfriend.

Her grandmother Ana Mulero said she has worked with cancer patients and has been pursuing a career in nursing.