Why we gathered on Oct. 10 to demand ‘Justice or Else’ 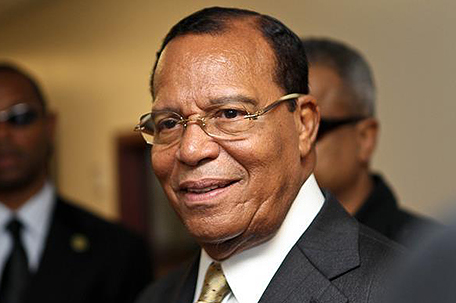 Special to the Trice Edney News Wire from JusticeorElse.com

The following is an open letter to America from the chief organizer and visionary, Nation of Islam leader, Minister Louis Farrakhan. In it, he outlines the meaning of the demand –  ‘Justice or Else’.

The following are the words of Minister Louis Farrakhan:

This October will mark the 20th Anniversary of the Million Man March, which was the largest public gathering in the history of America and the largest gathering of Black men in world history.

We set an example before the world on October 16, 1995 as Black men stood in ranks and a spirit of love, peace and unity was pervasive. We stood at that time for the necessity of Atonement, Reconciliation and Responsibility and in particular the need for Black men to appeal for God’s pardon for our failures to be the men that we hoped to be and ought to be. That was a magnificent and important day and appeal to the divine Supreme Being, who brought us through a time of great trouble.

Twenty-years later, however, conditions we face and rising levels of tyranny and oppression have brought us to another point in our sojourn in America. Today we suffer from an unbearable level of violence as law enforcement and Whites are able to abuse and murder us but the federal Department of Justice does little and state governments do virtually nothing. Death stalks the Black man, woman and child in America and few seem to care.

Our Native American brothers and sisters often live in abject poverty and are fighting to keep the little land that they have from the hands of a duplicitous U.S. government and corporate liars and thieves.

The Latino community is subjected to scrutiny, mistreatment and disrespect. Women struggle for full recognition of their value and their worth. Soldiers who have served their country in ill-conceived wars and conflicts based on lies, return home to be ignored and their broken bodies and minds left unattended. Even the poor Whites of this nation have no voice as a cruel oligarchy rules on behalf of a small group of individuals.

Dr. Martin Luther King, Jr., the great preacher and fighter for the poor, spoke of justice. He noted that the moral arc of the universe is long but it bends toward justice. What is justice? The Most Honorable Elijah Muhammad taught several important truths about justice: Justice is the greatest principle of fair dealing. Justice is the law that distinguishes between right and wrong. If there were justice, there would be no need for a Judgment. Justice is the weapon that God will use in the Day of Judgment.

We are living in that Day of Judgment at this present moment. And if we are denied what rightfully belongs to us then there has to be unified action that we take that will force the justice that we seek.

It is time that we say enough is enough. Scripture teaches us that inequity and injustice would call God Himself out of his hiding place to address the cries of those who yearn to breathe free. We are at that time. The time requires that we step forward and demand that the U.S. government address the failures of American society and the systemic deprivation of freedom, justice and equality from the masses of the American people.

The time requires that a demand be made on the U.S. government and we must deliver a fearless cry of “Justice Or Else!” We have tried praying in, singing in, lying in and young activists have even employed dying-in to dramatize and appeal for a proper government response to our suffering.

I am convening “Justice Or Else!” the 20th Anniversary gathering of the Million Man March on October 10, 2015 in Washington, D.C. By Allah’s (God’s) grace I plan to deliver an uncompromising message and call for the government of the United States to respond to our legitimate grievances.

If you agree with me, I am inviting you to join me and those from diverse faith traditions, races, political beliefs, spiritual schools of thought, different geographic regions, income levels and a fearless cadre of young leaders, backed by their fearless elders in this demand for “Justice Or Else!” in Washington, D.C.

The other side of this “war on two fronts” is effective organizing of our community to end fratricidal violence fostered by social conditions that breed lesser crimes, while the creator of the social conditions engages in killing, theft, kidnapping and extortion on a global scale. We, however, are clear that it is our responsibility to halt the killings among ourselves and our disrespect of Black life.

“Justice Or Else!” is not a march, but a gathering of those who are sober minded and serious about placing a demand on the United States government and putting power behind that demand to force the government to give us what we deserve.

This is not a march, but a gathering of those who understand that freedom has never been obtained without the loss of life and who step forward willing to give whatever sacrifice that the time and the God of this time demands.

We are certain that God would not bring us out to slaughter but He does require that we take the ultimate stand in order that He may show his power. We recognize that there comes a time in the life of all suffering people where there must be a willingness to lay down their lives for the cause of freedom and a future.

The most powerful weapon in our arsenal is our unity backed by the might of God Himself as this is the time foretold of in scripture as a Day of Judgment, a harvest time for all who have sown evil and who have sown good. We recognize that the Supreme Being is on the scene today and executing his power to punish and destroy the wicked. Our hope is not in carnal weapons of this world but in the power of the Master of this Day of Judgment in which we now live.

We recognize that the work of Dr. King, Jr., and all who came before him, remains unfinished. In his last public message, the civil rights stalwart talked of spreading the pain by engaging in economic withdrawal with strategic pooling and use of over $1 trillion in Black spending to put power behind our demands. We will engage in economic withdrawal in 2016 with a boycott of Christmas Holiday Spending, with its manipulation and exploitation of the emotions of children, parents, families and those we love, with its root in crass commercialism and its perpetuation of pagan practices and base desires when the focus is supposed to be on a righteous man and divine servant.

When our lives are taken unjustly it is the responsibility of government to act to prosecute and punish the killers. The federal government, in particular, has the responsibility to end assaults and killings under the color of law and mob attacks. We cannot continue to suffer like this and not organize and demand that government respond to our needs—or admit that we are still not true citizens.

Justice and equity cannot wait any longer and in October we will remember those killed in Charleston, South Carolina, those killed before Charleston, and those killed in fratricidal violence in the Black community. We will speak directly to government and to the challenges this country faces if it wishes to have any perpetuity and as the divine hand is ever moving toward justice.