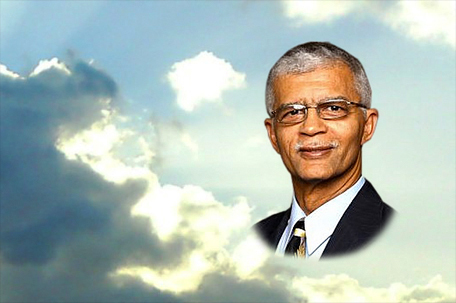 Lumumba, a legendary human rights activist and attorney who was elected mayor of Jackson last June, died of alleged natural causes on February 25.

Speculation has been rampant that he was killed because of his platform of self-determination for the Black community and his refusal to tap-dance around issues of White supremacy and systemic racism in the Deep South.

Read what Stokes had to say below:

“We gonna ask a question: Who killed the mayor? We’d feel a lot better if there was an autopsy,” Stokes said at the beginning of his speech. “First they say it’s not a heart attack and not a stroke, then what was it? You don’t just die like that and you’re healthy.”

“So many of us feel, throughout the city of Jackson, that the mayor was murdered,” Stokes told a WAPT reporter after his speech. “I’m not going to sugar coat it. I’m not going to try to say it in a way where the people feel, you know, that we should have said it in another way.”

“I believe that someone killed him. Now I can’t prove it, but I’m going to say it,” Stokes said. “That’s how I feel in my heart, and a lot of other people feel he was killed.”

As previously reported by NewsOne, Lumumba served four years on the Jackson City Council before running for mayor. He was elected on June 4, 2013, winning the general election with 86 percent of the vote.

“I’m just delighted. I feel wonderfully well about the people and their vote. Our slogan has been the people must decide and the people gave us an outstanding mandate today for positive change in the city of Jackson,” Lumumba said after the results were announced. “We intend to work diligently and put all our hearts and efforts into that and we’re going to be calling upon the people to work with us. We’re not working by ourselves.”

Lumumba spent part of the ’70s and ’80s as vice-president of the Republic of New Afrika, an organization, which advocated for “an independent predominantly Black government” in the southeastern United States and reparations for slavery.

“The provisional government of Republic of New Afrika was always a group that believed in human rights for human beings,” Lumumba told The Associated Press in a recent interview. “I think it has been miscast in many ways. It has never been any kind of racist group or ‘hate white’ group in any way…. It was a group which was fighting for human rights for Black people in this country and at the same time supporting the human rights around the globe.”

Lumumba was also founder of the Malcolm X Grassroots Movement and his platform called for a move towards Black self-determination in the Deep South.

Lumumba referred to himself as a “Fannie Lou Hamer Democrat,” a nod to the fearless civil rights leader who organized the Mississippi Freedom Democratic Party to challenge the White supremacist Dixiecrats that ruled the Land of Jim Crow at the time.

The National Conference of Black Lawyers is coordinating fundraising for the costs of an independent autopsy.

Nation of Islam leader Louis Farrakhan announced during his recent Saviour’s Day Address that fundraising would not be necessary because he would pay for the autopsy:

Chokwe, I’ve known him for nearly 40 years. He passed away about a week ago. His funeral will be on the 8th of this month. And he died under circumstances that we don’t know what it was. He became the mayor of Jackson, Mississippi. And any of you who know Mississippi and know Jackson…a Black man being mayor and trying to do right by all the people is not a mayor that those people want.

He was in the hospital. He was on the phone doing mayoral business. He was laughing. He was in good spirits and within a few hours, he was dead. I understand that they’re guarding his body and I was so happy to learn that they are getting an independent pathologist because medical examiners…we can’t trust them when our babies are dead and they make it seem as if it were under ‘natural circumstances.’

They lie to protect the government. We have to have our own independent pathologists and whatnot to look after us, so I understand they’re trying to raise the money. I told them don’t even waste time, call me. I will give you whatever it takes to get our own forensic specialist to go in and make sure that our brother died under the right circumstances.

A special election to replace Mayor Lumumba has been scheduled for April 8.