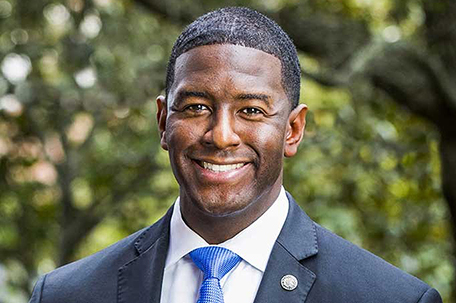 Florida voters received racist robocalls from someone claiming to be Andrew Gillum, the state’s first Black nominee for governor, after Gillum’s opponent blew a dog whistle to draw the attention of White supremacists to the race.

Voters, mainly in Tallahassee where Gillum is the mayor, started to receive the calls on Friday, which were paid for by The Road to Power video podcast based in Idaho.

“This is reprehensible – and could only have come from someone with intentions to fuel hatred and seek publicity,” stated Gillum’s campaign spokesman Geoff Burgan.

This attack against Gillum comes as no surprise. Less than 24 hours after winning the GOP nomination for governor, Rep. Rob DeSantis warned Florida voters during a Fox News interview on Wednesday that his Democratic rival would “monkey up” the state. A closer look at the Trump-backed candidate’s background revealed that he has vast connections with White supremacists, contradicting DeSantis’ flimsy denial that he’s not a racist.

Rhodes was previously linked to anti-immigrant robocalls in Iowa two days after the Aug. 26 funeral of Mollie Tibbetts, the University of Iowa student killed allegedly by a man believed to be an illegal migrant. Authorities also suspected Rhodes, who also goes by the last name Platek, of distributing racist CDs at an Idaho high school in December.

Meanwhile, DeSantis’ campaign distanced itself from the robocalls that its spokesman Stephen Lawson described as “absolutely appalling and disgusting,” according to the news outlet.

However, this probably won’t be the last time that DeSantis’ team will have to (half-heartedly) deny connections to a White supremacist group that attacks Gillum.