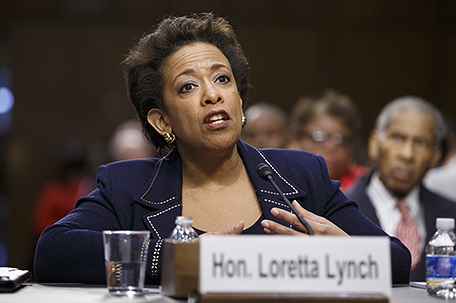 ABOVE PHOTO;  Attorney General nominee Loretta Lynch testifies on Capitol Hill in Washington, Wednesday, Jan. 28, 2015, before the Senate Judiciary Committee’s hearing on her nomination. Lynch defended President Barack Obama’s decision to shelter millions of immigrants from deportation though they live in the country illegally but she said they have no right to citizenship under the law. If confirmed, Lynch would become the nation’s first black female attorney general. It is the first confirmation proceeding since Republicans took control of the Senate this month.   (AP Photo/J. Scott Applewhite)

WASHINGTON — The White House blasted Senate Majority Leader Mitch McConnell on Monday for holding up confirmation of President Barack Obama’s pick for attorney general, arguing the “unconscionable delay” was a stain on the Kentucky Republican’s leadership.

McConnell warned over the weekend that he wouldn’t hold a vote on Loretta Lynch’s confirmation before the Senate finishes a human trafficking bill that has hit a roadblock over a provision regarding funding for abortions. White House press secretary Josh Earnest said the delay on the attorney general post reflected “inept leadership,” not a flaw in the trafficking bill.

“You’ve got to hand it to Republicans, that they’ve taken even a measure as common sense as that and turned it into a partisan controversy,” Earnest said. “That is not a reflection of a flaw in the bill. It’s a reflection of inept leadership.”

He suggested it was questionable whether Obama could trust McConnell and his fellow GOP leaders and “whether their word is good with the president.”

McConnell’s spokesman, Don Stewart, retorted that “It wasn’t Republicans who ‘turned it into a partisan controversy.’ … It was only when the president’s party decided to filibuster a bill they support that it became controversial.”

McConnell put Lynch’s confirmation vote planned for this week on hold after Senate debate on the trafficking bill broke down. Democrats made a late objection to a provision that prohibits money dedicated to a fund for victims from being used to pay for abortions except in very limited circumstances. Similar abortion funding restrictions have been in place for decades, but abortion-rights supporters said the legislation goes further.

A test vote is set for Tuesday on the trafficking bill, and looks certain to fall short of the 60 votes needed. Aides in both parties, however, suggested that the vote could set the stage for some kind of deal to be reached, perhaps tweaking the abortion language in a way senators of both parties could agree to.

It’s not clear whether that could happen quickly enough to allow for a vote on Lynch this week. If not, she might have to wait until April, because next week will be consumed with votes on the budget and Congress then recesses for two weeks.

Despite the delays, senators of both parties remain confident she will be confirmed in the end, though perhaps with a bare minimum of support.

For now, the delay on her confirmation, along with the spat over the trafficking bill, was providing plenty of fodder for partisan bickering.

Senate Minority Leader Harry Reid, D-Nev., echoed the White House in challenging McConnell’s integrity, claiming that McConnell “gave his word” that Lynch’s confirmation would take place through the normal legislative process and that her nomination would be considered this week. “Now he’s hedging on that,” Reid said on the Senate floor.

Republicans hit back, blaming Democrats for turning a bipartisan piece of legislation into a partisan meltdown with unfounded complaints about the GOP slipping in abortion language that Republicans contend Democrats knew about all along.

Sen. John Cornyn, R-Texas, argued that Democrats were raising objections in part to make the newly Republican-led Senate look “dysfunctional” and called on Democrats to join Republicans on Tuesday’s vote to move ahead on the bill. The GOP would need support from six Democrats.

“We need six Democrats who are willing to break away from the tyranny of their party’s own leadership here in the Senate and do what they know is the right thing,” Cornyn said on the Senate floor. “I hope they’ll think long and hard before saying `no’ to the abused children and the victims of human trafficking.”

Although the White House frequently threatens to veto pending bills unpalatable to Obama, Earnest wouldn’t say whether Obama would sign the bill with the abortion language included. He suggested the issue is moot because Republicans don’t have enough support to pass it.