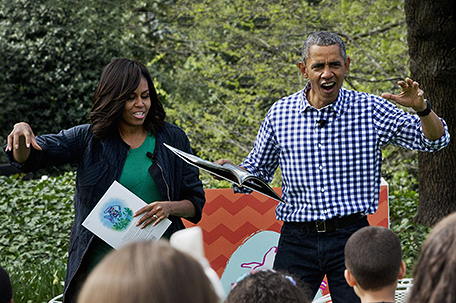 ABOVE PHOTO:  First lady Michelle Obama and President Obama get up to demonstrate the “wild rumpus” part of the book, “Where The Wild Things Are,” as the president read the book to children during the White House Easter Egg Roll at the White House in Washington, Monday, March 28, 2016.  (AP Photo/Jacquelyn Martin)

WASHINGTON — Calling the moment bittersweet, President Barack Obama and first lady Michelle Obama welcomed thousands of children to the South Lawn of the White House Monday morning for the final Easter Egg Roll of his presidency.

The egg rolling began in 1878. Now the event includes storytelling, musical performances and tips from professional athletes on how to play basketball, tennis and other sports. There are even cooking demonstrations and yoga. This year, the first lady added a fun run to the mix.

“I’m going to be running around the White House with a bunch of kids and any adults who feel like they can hang,” the first lady told the crowd as the president jokingly signaled in the background that the run wasn’t for him.

The Obamas spoke from a balcony that overlooks the lawn with dogs Bo and Sunny and the Easter Bunny at their side. They then went out into the crowd for some hands-on play. The president read the children’s book, “Where the Wild Things Are,” a classic from 1963, and the Obamas acted some of the story out, marching enthusiastically with the kids as he read the line “let the wild rumpus start!” 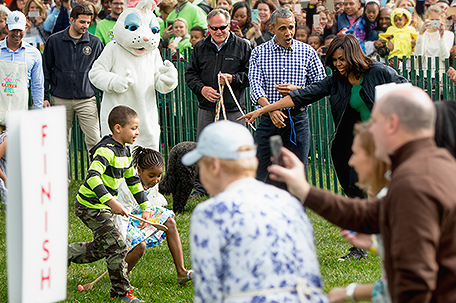 Obama couldn’t resist heading to the basketball court, giving out hugs and handing balls to kids. He missed his shot as retired NBA players Shaquille O’Neal and Jason Collins looked on. The president also tried his hand at tennis, lobbing a bright orange and yellow ball back and forth with a young woman. Then he switched to doubles, teaming up with a boy in a bright green shirt as his playing partner.

More than 35,000 people received tickets that allow them to walk on the South Lawn of the White House, rain or shine. Fortunately, the sun broke through mid-morning after a night of scattered rain showers.

The theme of this year’s event is “Let’s celebrate.” The first lady said she wanted to celebrate families and the nation in what will be the couple’s last Easter in office.

“It’s our diversity. It’s our values,” the first lady said. “That’s what makes us strong.”

The fun run is intended to highlight the first lady’s “Let’s Move!” initiative, which focuses on reducing childhood obesity. She also promised dancing: “We’ve got a little “whip” and a little “nae nae” – or however you do it,” she said, providing a brief example of how the dance is done.

Simple ways to make Easter special for family of all ages