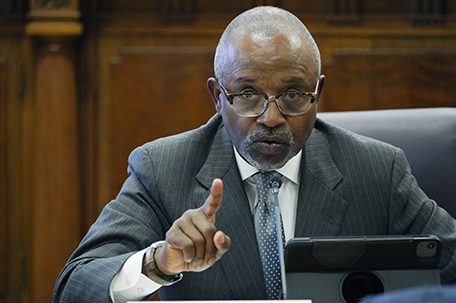 JACKSON, Miss. — In Mississippi, where elected officials have a long history of praising self-sufficiency and condemning federal antipoverty programs, a welfare scandal has exposed how millions of dollars were diverted to the rich and powerful — including pro athletes — instead of helping some of the neediest people in the nation.

The misuse of welfare money rankles Nsombi Lambright-Haynes, executive director of One Voice, a nonprofit that works to help economically vulnerable communities in Mississippi.

“It’s shameful and disgusting, especially when we’ve been a state where we hear discussion every year about poor people not needing resources and poor people being lazy and just needing to get up to work,” she said.

The state has ranked among the poorest in the U.S. for decades, but only a fraction of its federal welfare money has been going toward direct aid to families. Instead, the Mississippi Department of Human Services allowed well-connected people to fritter away tens of millions of welfare dollars from 2016 to 2019, according to the state auditor and state and federal prosecutors.

The scandal has ensnared high-profile figures, including retired NFL quarterback Brett Favre, who is one of more than three dozen defendants in a civil lawsuit that the current Human Services director filed to try to recover some of the welfare money wasted while Davis was in charge.

Temporary Assistance for Needy Families money helped fund pet projects of the wealthy, including $5 million for a volleyball arena that Favre supported at his alma mater, the University of Southern Mississippi, Mississippi Auditor Shad White said. Favre’s daughter played volleyball at the school starting in 2017.

Another $2.1 million of TANF money went toward an attempt to develop a concussion drug by a company in which Favre was an investor, White said. Favre has asked a judge to dismiss him from the lawsuit, with his attorney arguing that the Department of Human Services — not Favre — is responsible for “grossly improper and unlawful handling of welfare funds.” Favre is not facing criminal charges.

Some of the money that was intended to help low-income families was spent on luxury travel for Davis and on people close to him, drug rehab for a former pro wrestler and boot camp-style gym classes for public officials.

“What may seem like an easy handout program is not,” said Brandy Nichols, a single mother of four children age 8 and younger.

Mississippi requires TANF recipients to prove they are actively looking for employment and Nichols, of Jackson, said the job search is time-consuming.

“It’s work, and sometimes work takes away my ability to find a true, stable job,” she said.

TANF is for families that have at least one child younger than 18. To qualify in Mississippi, the household income must be at or below 185% of the federal poverty level. The current upper income limit for a family of three is $680 a month.

The Associated Press researched poverty statistics for 1982 through 2021, which show Mississippi was the poorest state for 19 of those 40 years and among the five poorest for 38 years. In 2021, the U.S. poverty rate was 11.6% and Mississippi’s was the highest in the nation, 17.4%.

Those who do qualify get the lowest payments in the country, according to the Center for Budget and Policy Priorities.

April Jackson, a single mother with children ranging in age from a few months to 13 years old, said she received about $190 a month in TANF when she was pregnant with her third child.

Eleven years ago, the monthly payment “bought diapers and stuff like that.” But she said that after she started receiving child support from the father of her oldest son, Human Services ended her TANF benefits because she was suddenly over the income limit for the aid.

“It messed me up real bad,” said Jackson, who lives on a tight budget. “I wasn’t able to pay my part of the bills. I couldn’t buy my kids clothes for school or the shoes they needed.”

The nonpartisan Congressional Research Service said that in 2020, New Hampshire had the highest TANF payment in the country, $862 a month for a single parent and one child. Mississippi’s monthly payment for a family of two was $146.

In 2021, Mississippi increased its TANF payments by $90 per month, per family — the state’s first increase since 1999 — at Anderson’s recommendation. The increase cost $2.8 million, and Republican Sen. Joey Fillingane said during a Senate debate that it was all paid by federal money, not state money.

“We’re not talking about a lot of money,” Fillingane said. “These are the poorest of the poor in our state.”

“Of course, those are all our dollars,” replied Sen. Melanie Sojourner, one of 18 legislators — all Republicans — who voted against the increase.

The federal government sends Mississippi about $86.5 million a year for TANF and allows states wide leeway in spending. Records show Mississippi does not always spend its entire allotment, sometimes carrying millions of dollars from year to year.

During Mississippi’s 2016 budget year, the Department of Human Services sent $17.3 million in direct aid to recipients, about half of the state’s TANF spending. During the next three years under Davis, the department decreased the amount of TANF money going to individuals.

By the 2019 budget year, Human Services was spending $9.6 million on direct aid, 16% of the TANF money. About $27.6 million, 46% of the money, was going to the Mississippi Community Education Center. The organization — run by Nancy New and one of her sons, Zachary New, who have pleaded guilty to state charges in the welfare misspending case — said it was fighting poverty by working on parenting skills, school dropout prevention, job readiness and other programs.

For Nichols — who spoke to Democratic state lawmakers about her experience on TANF — maintaining steady employment has been difficult at times because some of her children have health problems and she has to care for them.

She has worked as a cashier, waitress, housekeeper and certified nurse assistant. But when she has been unable to find a job quickly, she has had to work volunteer hours in a state Department of Human Services office as a condition for keeping TANF payments.

“That’s not career development,” she said. “That’s called being stuck in limbo.”