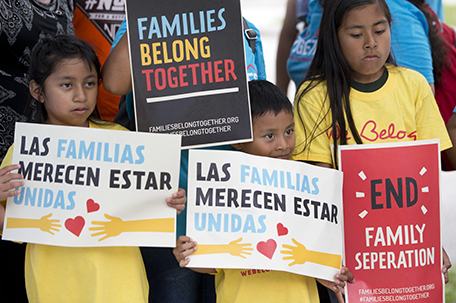 ABOVE PHOTO:  A group of children hold up signs during a demonstration in front of the Immigration and Customs Enforcement (ICE) offices, Friday, June 1, 2018, in Miramar, Fla. The children were taking part in the Families Belong Together Day of Action, where demonstrators in cities across the U.S. protested against separating immigrant children from their families. (AP Photo/Wilfredo Lee)

The administration is sending more than 1,600 immigrants — including some of those parents — to federal prisons amid a lack of space in other facilities. Inslee said six children were brought to a Seattle foster care facility after being separated from their families at the border. It’s unclear where the parents are, but the governor’s office said they are not in Washington state.

The unnamed foster care center is the only facility in Washington that takes referrals from the U.S. Immigration and Customs Enforcement. Local officials couldn’t say what obligation the state has to care for the children.

ICE said it was sending detainees to federal prisons in Victorville, California; La Luna, Texas; Sheridan, Oregon; and SeaTac, Washington. The agency said it needs more space due to a “surge in illegal border crossings and implementation of the U.S. Department of Justice’s zero-tolerance policy.”

U.S. Rep. Pramila Jayapal, a Seattle Democrat, said she met women being held at the SeaTac prison who had come from 16 different countries. She said most of them are seeking political asylum from violence and rape against themselves or their children.

Inslee and state Attorney General Bob Ferguson sent a letter to the Trump administration last Thursday seeking more information, including where the children of the women are and when they can expect to see their children again. The letter came after the Northwest Immigrant Rights Project reported that as many as 120 asylum seekers had been transferred to the Federal Detention Center at SeaTac.

U.S. Attorney General Jeff Sessions insists the policy of separating families is necessary to deter illegal border-crossings, and authorities say the decision to send people to prisons is a temporary one amid a shortage of beds.

But Ferguson, who successfully fought Trump’s travel ban last year, said he may sue again to stop ICE from separating families at the border.

“Frankly, I’m not sure how Attorney General Sessions sleeps at night with a policy like this,” Ferguson said.

King County Executive Dow Constantine said some of the detainees arrived at the county’s Boeing Field on flights chartered by ICE. He said he’s seeking to bar them from using the publicly-owned airport.

Last Wednesday, a federal judge in California ruled that a lawsuit involving two mothers could go forward, saying that if the policy was being carried out as described in the lawsuit, it is “brutal, offensive, and fails to comport with traditional notions of fair play and decency.” The judge said he would issue a separate ruling on whether to expand the lawsuit to apply to all parents and children who are split up by border authorities.