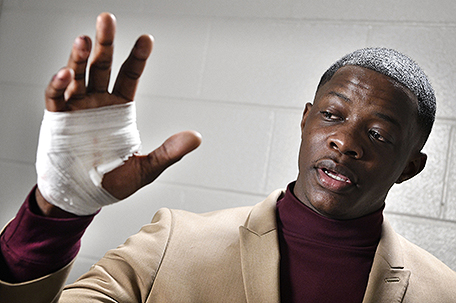 May 11, 2018 Category: Week In Review Posted by: Philadelphia Sun Staff

ABOVE PHOTO:  James Shaw Jr., shows the hand that was injured when he disarmed a shooter inside a Waffle House on Sunday, April 22, 2018, in Nashville, Tenn. A gunman stormed the Waffle House restaurant and shot several people to death before dawn, according to police, who credited Shaw, a customer, with saving lives by wresting the assailant’s weapon away. (Larry McCormack/The Tennessean via AP)

NASHVILLE, Tenn.  — A man being hailed as a hero for wrestling an assault-style rifle away from a gunman at a Tennessee Waffle House has raised more than a quarter of a million dollars for the victims.

James Shaw Jr., 29, was dining with a friend at the Nashville restaurant when a gunman wearing only a jacket opened fire outside with an AR-15 rifle and then stormed the Waffle House, police said. Four people were killed and four others injured, including Shaw, in the April 22 attack.

Shaw, on Monday, said he was overwhelmed by the response from people.

Shaw set a funding campaign goal of $15,000 to offer modest financial support to the victims. As of Monday, he said, the campaign had received more than 6,000 donations totaling $227,000.

“To the thousands of people who have expressed their care, prayers and made financial donations, I can only respond by saying ‘Thank you,’” Shaw said in his statement. “Your gifts to the people who lost their lives and suffered injuries mean so much for all who were impacted by this terrible tragedy.”

The account will be closed May 13. After that, Shaw said, the Nashville office of financial services firm UBS will distribute the money to the victims and their families.

He fled the scene of the Waffle House after Shaw wrested the AR-15 away from him and threw it over a counter, police said. Reinking was captured the next day following a massive manhunt that lasted more than 24 hours.

Reinking’s public defender Monday asked that the suspect be given an outpatient mental health evaluation before proceeding with the court case. Davidson County General Sessions Judge Michael Mondelli granted the request and said lawyers should come back in three weeks for a status hearing.

The public defender did not speak to reporters afterward and has not returned an email from The Associated Press. A spokesman for prosecutors said a judge has issued a gag order in the case.

Reinking was a onetime crane operator who bounced between states and suffered from delusions, sometimes talking about plans to marry singer Taylor Swift, friends and relatives told authorities.

He was detained by the Secret Service in July after he ventured in to a forbidden area on the White House grounds and demanded to meet President Donald Trump.