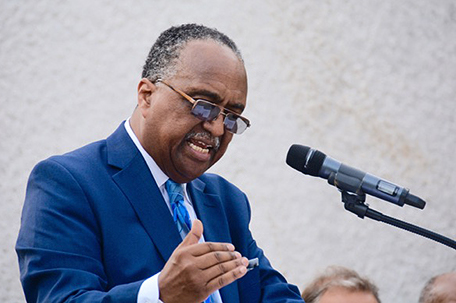 WASHINGTON– As the nation marks the 50th anniversary of the Voting Rights Act of 1965, civil rights groups and leaders, union representatives, elected officials, and citizens gathered at the Martin Luther King Jr. Memorial on the National Mall in Washington, D.C. to address the threats to voting rights today.

“We stand here today with two missions: To celebrate the signing of the 1965 Voting Rights Act, and to recommit ourselves to making sure that the victory won 50 years ago will not be wiped away by a Supreme Court that has shown us supreme disrespect by gutting a key section of the Voting Rights Act,” said Charles Steele, Jr., president and CEO of the Southern Christian Leadership Conference (SCLC), which co-sponsored the rally. “The illegitimate reason for this action is that it’s all about politics…where people figure if they can suppress 10 to 15 percent of the Black vote, they can steal an election.”

Section 4 gave the voting law teeth; it provided an objective measure for discriminatory practices, and flagged the states that had discriminated against Black voters. Section 5 mandated that these flagged states could not change voting procedures without first clearing the proposed changes with the U.S. Justice Department or a federal judge in Washington. The states could be exempted from such requirements upon proving they no longer discriminated.

Two years ago, in a 5-4 vote, the Supreme Court found Sections 4 and 5 unconstitutional. The conservative majority ruled that the measure, based on practices and data from the 1960s, was no longer relevant in today’s racial and political climate.

Two hours after the ruling, the Texas attorney general authorized a voter ID law that the Justice Department had previously blocked as a civil rights violation. According to the Brennan Center for Justice at New York University School of Law, 22 states passed new voting restrictions in time for the 2014 midterm elections.

Voting faces other challenges as well. Thanks to felony disenfranchisement laws, 6 million Americans cannot vote – 13 percent of Black men fall into this gap, which is seven times the national average, according to the Brennan Center. States with a Republican majority in the state house are also closing polling locations, chipping away at early voting, and redrawing district lines to dilute the voting power in communities of color.

Two 2016 Democratic presidential candidates were present at Thursday’s rally in the shadow of the King Memorial on the Mall, and both expressed strong disapproval of this current state of affairs.

“Anybody who is suppressing the vote, anybody who is intentionally trying to keep people from voting – because that candidate knows that people will vote against him or her – that person is a political coward,” said Senator Bernie Sanders (I-Vt.). “That person is undermining American democracy.”

Democratic candidate Willie Wilson, a Chicago businessman, talked about the difficulty of long-shot candidate participating in the political process.

“I am a product of the Voting Rights Act and an example of what happens when that right is gained,” he stated, sharing his life story as a young sharecropper with a seventh-grade education turned international businessman, among other successes.

“When I ran for mayor of Chicago…it cost me more than $200,000 just to get on the ballot. When I finally got on…50,000 people, my supporters were told they weren’t on the [registered voter] roll. When I am denied, you are denied.”

No Republican candidates attended the event.

“I’m a little concerned today because…we sent invitations to every presidential candidate. Not one Republican candidate has chosen to show up. I don’t know of one major [media] outlet reporting of the Voting Rights anniversary today, as if we do not have a problem,” said Martin Luther King III. “So I have mixed feelings today, and whenever I come to this site I’m reminded that the work is not done.”

The NAACP is currently making its historic, 860-mile “America’s Journey for Justice” relay march from Selma to Washington, D.C.

“We have to march in 2015 because the Voting Rights Act will not be restored any other way. This march is a demonstration that’s tied to education and legislation, not commemoration,” said Cornell Brooks, president and CEO of the NAACP. “They decimated the most effective part of the most effective civil rights legislation. This constitutes a desecration of the memory of our forebears.”

Noted activist and comedian Dick Gregory spoke at length on voting rights, his activism, and the perils of American racism.

“We built everything, now we’re going to ask them for some bull—-? They reduced us, and we believed it,” he said. “I wouldn’t be here now had I not seen people willing to die for this Voting Rights Act. We still have that same power.”

Two bills aimed at repairing the damage by the Supreme Court are pending in Congress. The Voting Rights Amendment Act seeks to restore Sections and 4 and 5 with a new measure based on more recent voter suppression practices and data. The Voting Rights Advancement Act, sponsored by Rep. Terri Sewell (D-Ala.) in the House, does this and more, expanding the reach and protections of the original law.

“We have one of the lowest voter turnouts in the world. We should be trying to figure out how to increase voter turnout, not reducing the low numbers we already have,” Steele said.

“Let’s not forget how we got to this point. Not only was blood shed on the Edmund Pettus Bridge in Selma, Ala., some people actually gave their lives…. But they wouldn’t let nobody turn them around. And we ain’t gonna let nobody turn us around.”