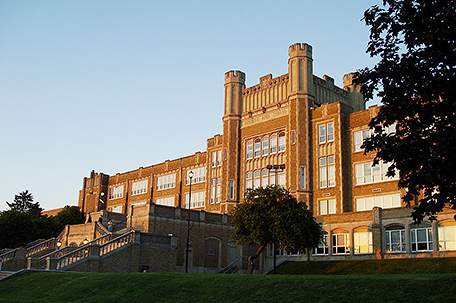 READING, Pa — On the second day of class at Reading Senior High School, teacher Eric Knorr directs his students’ attention to the banners hanging on the wall. Syracuse. Temple. Brown. Penn State. All of them brought back by former students who bucked the odds and went to college.

“You need to make sure you have a plan,” Knorr exhorts the class. “Because your plan will lead to a banner, OK? It will lead to an opportunity to go to college.”

Long seen as a way out of poverty, higher education eludes most students at Reading High. The public schools here are plagued by low test scores in reading, math and science; the school district has one of the highest dropout rates in the state; and, in a city where almost 60 percent of the population is Hispanic, many students’ parents speak little or no English.

Yet, as another school year gets underway, Reading’s Alvernia University is placing a $10 million bet that it can help kids in one of the nation’s poorest cities get ready to do college work – and to succeed once they get there.

The first five students selected for the Reading Collegiate Scholars Program joined Alvernia’s freshman class last week, flush with full-tuition scholarships and plenty of support to help them make the transition from a high school where fewer than seven in 10 graduate.

“I want to be the best that I can, and I just push myself,” said Melisa Rivera, 18. “There’s no obstacle I can’t overcome.”

Alvernia, a small, private school started by Roman Catholic sisters, has partnered with the city’s Olivet Boys & Girls Club on a program that aims to help hundreds of high school students get ready for college – any college – through an intensive four-year program of tutoring and mentoring. That effort launched in the spring.

Additionally, as many as 20 city kids a year will get full scholarships to Alvernia, where they’ll receive additional tutoring and mentoring. The university is raising money to endow the scholarships.

Alvernia is patterning its program after one run by the Posse Foundation, a 25-year-old group that’s recruited more than 5,000 high-achieving high school students from major cities like New York, Los Angeles and Chicago to receive full scholarships from partner colleges and universities.

But there are important differences. Reading (pronounced REH’-ding) is a small, easily overlooked city of 88,000, while the students that Alvernia seeks to serve are not the ones who scored 1,400 on their SATs. They’re typically average kids with potential – the ones who often slip through the cracks.

Rivera said most of her childhood friends “took a wrong path” and “started to go with the wrong crowd.”

“They had the motivation when they were younger,” said Rivera, “but they lost it.”

Alvernia had tried before to serve underprivileged teenagers in Reading, with little success. Only 20 percent graduated within six years.

“We were bringing students here and they were not doing well,” Myers said. “They weren’t coming back after the first year.”

Alvernia realized it would have to do more to help. Among other requirements, students in the Reading Collegiate Scholars Program commit to a summer “bridge” program and to regular meetings with community and faculty mentors who will help make sure they stay on track.

“You have to have a mentality that you want to succeed, to get out of that environment,” said scholarship student and Reading native Juan Paula, 17, who’s majoring in criminal justice and wants to be an officer in the Marine Corps. “Because you have people constantly trying to bring you into that environment, and if you’re not strong-willed enough, you’ll get dragged in.”

While their fellow freshmen moved into the dorms last week, the Reading crew assembled in a campus media suite to work on a video promoting their hometown – a city, they say, with a lot going for it despite its problems.

Forget what you’ve heard, they told the camera. Give Reading a chance.

They could’ve been talking about themselves.