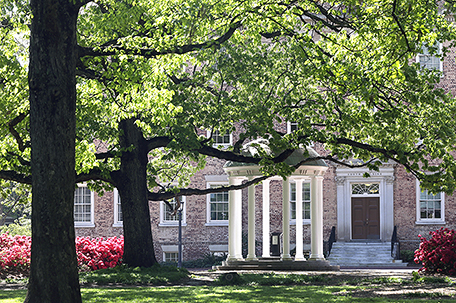 ABOVE PHOTO: The Old Well is seen near the South Building on campus at The University of North Carolina in Chapel Hill, N.C. The flagship school of North Carolina’s university system announced Friday, July 15, 2022, that it has reached a settlement with the journalist who ultimately shunned the school in an extended dispute over tenure and joined a historically Black university. (AP Photo/Gerry Broome, File)

CHAPEL HILL, N.C. — The flagship school of North Carolina’s university system announced Friday that it has reached a settlement with the journalist who ultimately shunned the school in an extended dispute over tenure and joined a historically Black university.

David Boliek, chairman of the Board of Trustees at The University of North Carolina at Chapel Hill, said the settlement with Nikole Hannah-Jones was for less than $75,000 and was approved by school Chancellor Kevin Guskiewicz, news outlets reported.

Attorneys representing Hannah-Jones, including the NAACP Legal Defense & Educational Fund, Inc., last year threatened to take legal action, including filing a federal discrimination lawsuit, against UNC-Chapel Hill and its board of trustees over the failure to give her tenure, news outlets reported at the time.

Boliek said the settlement reached by the university was to resolve that “potential legal action,” and that a formal lawsuit was never filed by Hannah-Jones’ attorneys.

The dispute over whether UNC granted Hannah-Jones a lifetime faculty appointment prompted weeks of outcry as numerous professors and alumni voiced their frustration, and Black students and faculty questioned during protests whether the predominantly white university values them.

Hannah-Jones — who won the Pulitzer Prize for her work on The New York Times Magazine’s 1619 Project focusing on America’s history of slavery — was hired as UNC’s Knight Chair in Race and Investigative Journalism at the Hussman School of Journalism and Media.

She noted that she hadn’t sought out the job and was recruited by UNC’s journalism dean before her tenure application stalled over objections by a powerful donor and concerns by conservatives about her work.

Hannah-Jones’ tenure application was submitted to UNC’s trustees in 2020, but it was halted after a board member who vets the appointments raised questions about her nonacademic background. Instead, she was initially given a five-year contract, despite the fact that her predecessors were granted tenure when appointed. After weeks of mounting pressure, the trustees finally voted to offer tenure.

While the trustees voted 9-4 to offer her tenure, Hannah-Jones said in an interview with The Associated Press that the unfairness of how she was treated as a Black woman steered her toward turning the offer down. She accepted a chaired professorship at Howard University, a historically Black school in Washington, D.C.