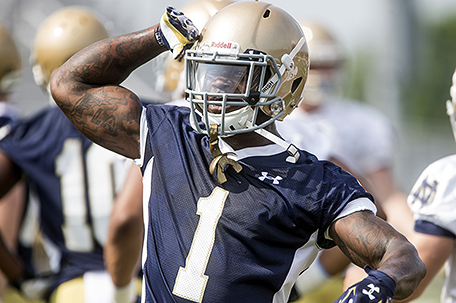 May 14, 2016 Category: Week In Review Posted by: Philadelphia Sun Staff

ABOVE PHOTO:  Notre Dame’s Greg Bryant salutes a teammate during NCAA college football practice in Culver, Ind. Bryant was declared brain dead Sunday, May 8, 2016, a day after he was found shot in a car on Interstate 95 in South Florida. Bryant started his career at Notre Dame and spent last season attending ASA College, where he played in just one game. He was the biggest name in UAB’s first recruiting class since the school restarted its program. (Robert Franklin/South Bend Tribune via AP, File)

Former Notre Dame running back Greg Bryant, who signed with University of Alabama-Birmingham last November, died Sunday after being critically injured during a Saturday morning highway shooting in South Florida. He was 21.

Bryant, a Delray Beach native, was driving his car, with 25-year-old friend Maurice Grover as a passenger, on Interstate 95 in Miami when he and Grover were shot. Police found Bryant and Grover in his car around 4:45 a.m. ET and authorities are still looking for witnesses to the shooting.

Grover sustained minor injuries, according to the Palm Beach Post.

After news of Bryant’s death broke, players, coaches and sports personalities took to Twitter to express their condolences.

Bryant had been living in a North Miami hotel room while attending the ASA Miami junior college after being ruled academically ineligible last fall at Notre Dame. After barely seeing the field as a freshman in 2013, Bryant ran for 289 yards and three touchdowns for the Fighting Irish in 2014.

Because UAB won’t play again until the 2017 season, Bryant was allowed to enroll in January 2016 instead of possibly having to wait an extra year to get eligible elsewhere. He could become eligible to compete after spending an academic year at UAB.

‘’Coach Clark, he really did me a favor, because I was living in hotels in Miami,’’ Bryant told The Associated Press before national signing day in February. ‘’He said I could come in as soon as the semester was over. Any other school I would have had to wait another semester and probably be enrolled by December. I just bought into what coach Clark was saying and I got in with a 2.0’’ GPA.