Two Pennsylvania legislators charged with bribery conspiracy and other crimes 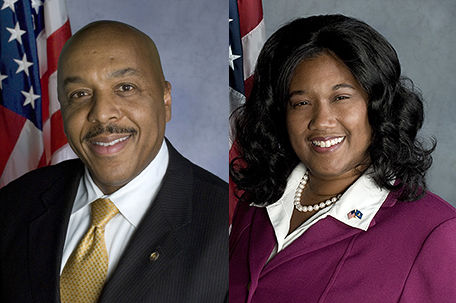 The OAG had conducted its political corruption investigation from 2010 through 2012, which resulted in 113 recorded meetings or conversations. Twenty six of those recordings featured Rep. Ron Waters, who accepted nine cash payments from the Confidential informant totaling $8,750. Twenty four of those recordings featured State Rep. Vanessa Lowery Brown, who accepted five cash payments totaling $4,000. That evidence was presented to the grand jury, which found that the cash payments were made because of the representatives’ official positions and their promises to perform official acts on behalf of the CI. Moreover, both representatives testified before the Grand Jury and admitted to their criminal conduct.

Rep. Waters, who has been a member of the Pennsylvania House of Representatives since 1999 and is currently the Secretary for the House Democratic Caucus, accepted payments from the CI beginning on October 22, 2010. In total, Rep. Waters took $8,750 from the CI, and took or promised to take the following official actions on behalf of the CI: voting “no” on House Bill 934; setting up – and attending – a meeting with an executive at the Philadelphia Parking Authority regarding a collections contract there; and contacting an elected official to help the CI’s friend obtain a job. Rep. Waters testified before the grand jury and admitted to this conduct, and acknowledged that he knew what he was doing was wrong, each time that he did it.

Rep. Brown, who has been a member of the Pennsylvania House of Representatives since 2009, accepted five payments from the CI beginning on February 11, 2011. In total, Rep. Brown took $4,000 from the CI, and took or promised to take the following official actions on behalf of the CI: voting “no” on House Bill 934; supporting privatization of the State Liquor Stores; promising to vote against “Lifeline,” a program offering discounts on phone service for low-income subscribers; setting up – and attending – a meeting with Thomasine Tynes, former President Judge of the Philadelphia Traffic Court, regarding a collections contract there; and setting up a social event with other “like-minded” legislators to help the CI broaden his legislative contacts. She also asked the CI what he gets out of the deal, and was willing to vote as directed by the CI. Rep. Brown testified before the grand jury and admitted to this conduct, and acknowledged that she knew what he was doing was wrong, each time that she did it. She also admitted that she knew there were strings attached to the money she was being given.

Regarding the criticism that the investigation employed racial targeting, the grand jury found that such a claim was simply false. The grand jury heard testimony from numerous individuals, both black and white, both former and current state employees, who were involved in the original investigation. The grand jurors found their testimony to be credible. The grand jury also reviewed extensive documents obtained by subpoena. These internal documents demonstrated that there had never been any factual basis to the claim that the investigation was racially targeted. Finally, a high-ranking officer from the administration of the current attorney general testified under oath that “[t]here is absolutely nothing in the case file that would lead one to believe that” the investigation targeted only African-American legislators or ignored wrongdoing by white legislators. The official also testified that he “never for one second believed” that investigators were directed to conduct such an investigation.

With respect to the CI, the grand jury investigated whether his own charges and their resolution crippled this prosecution. After subpoenaing the files in the CI’s case and hearing testimony from current OAG employees who prosecuted that case, the evidence revealed that the total loss amounted to less than $100,000 – sufficient to provide leverage needed to gain his cooperation, but hardly so extreme as to justify dropping a major political corruption probe at precisely the point where the evidence was complete and compelling. Moreover, the CI was hardly the lynchpin of the case; his actions were thoroughly corroborated by the audio- and video-recordings, and he has been doubly corroborated by the testimony of Representatives Brown and Waters. The grand jury, therefore, found nothing concerning the CI that would undermine charging those caught on the tapes.

The grand jury also examined whether any of the legislators were “entrapped.” To that end, the jurors reviewed investigation documents that were created before any recordings had been made, and heard from investigators about how they proceeded. Most tellingly, Representatives Brown and Waters – and Judge Tynes – testified regarding their introductions to the CI and how he was passed from one public official to another. Finally, the grand jury reviewed a document prepared by the current administration of the OAG, which confirmed these findings. In an email between two high-ranking officials there, one stated that the case had “ample predication,” and that “no legislator was entrapped.” The other high-ranking official agreed. And so did the grand jury, finding no sign of entrapment that would undermine its recommended charges.

Finally, the grand jury looked at a “comprehensive” review of the case conducted by the current administration of the OAG, which supposedly exposed fatal weaknesses that made the case impossible to prosecute. That process was difficult because, despite numerous public references to this allegedly comprehensive review, it had never been shared with the public. And despite numerous requests and subpoenas, the grand jury did not receive the document itself until October 31, 2014, many months after the grand jury began its work, and only after a court order. Indeed, on repeated occasions, the grand jury was assured that it had received all relevant materials, only to receive significant additional materials upon judicial intervention. Each new document dump, of course, indicated that the prior representations had been false.

Nevertheless, the grand jury actually found that it was the review, rather than the underlying investigation, that appeared flawed. The review failed to examine a wealth of internal documents – documents created by and in the possession of the OAG – that contradicted the report’s assumptions. The review also failed to include interviews of agents to the investigation or others whose knowledge would have refuted the report’s preferred conclusions.

In short, the grand jury found nothing in the well-publicized “comprehensive” review that undermined its confidence in the recommended charges. The evidence outlined in the presentment is unusually damning, consisting as it does not only of eyewitness accounts, but of hours of tape recordings, and of detailed admissions by the subjects of the investigation themselves. Indeed, the fact that the subjects of the investigation agreed to testify freely before the grand jury is a testament to the strength of the evidence that had been compiled long before this matter was submitted to this grand jury. That evidence must see the light of day, and criminal charges are just and fair.

Representatives Brown and Waters turned themselves in to authorities this morning and are currently being processed by the Pennsylvania State Police.

Jackson doctor to be charged in court