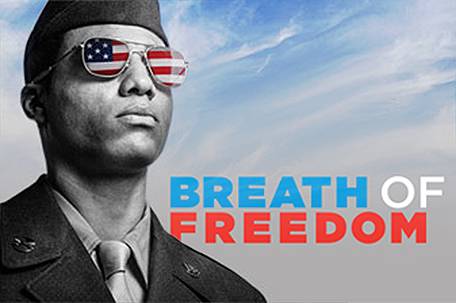 New York– They fought for democracy in a segregated army and marched as conquerors into a country in ruins. Finding a “breath of freedom” in post-World War II Germany, African-American soldiers experienced for the first time what it felt like to be treated as equals—and returned home determined to change their country. This largely unknown chapter in American history is told in Breath of Freedom, a new two-hour documentary narrated by Academy Award winner Cuba Gooding, Jr. (Red Tails, Men of Honor) premiering Monday, February 17 at 8pm ET/PT on Smithsonian Channel.

Featuring interviews with former Secretary of State Gen. Colin Powell and Congr. John Lewis, this is the remarkable story of how World War II and its aftermath played a huge role in the Civil Rights Movement. It’s a story told through the powerful recollections of veterans like Charles Evers, brother of slain Civil Rights icon Medgar Evers. From the beginning, black soldiers felt the absurdity of being asked to fight for freedom while being denied it in their own army. “My brother and I and all the other young negroes, we couldn’t stay in the same barracks with the white soldiers,” Evers says. “We couldn’t eat in the same dining hall with the white soldiers. We had all white officers.”

“The military had actually built a separate air base just to train blacks,” recalls Roscoe Brown, who would become one of the legendary Tuskegee airmen. “So the segregation was so silly and stupid, they would spend money to build a separate air base to keep blacks separate from whites.”

Breath of Freedom traces African-American soldiers from Normandy to the Battle of the Bulge, when American forces faced such a crisis that they had no choice but to break the rule of strict segregation and allow black soldiers to fight side by side with whites. As the fighting neared an end, one young black soldier, Leon Bass, experienced first-hand the horror of racism under Nazi Germany when he helped liberate the Buchenwald concentration camp. “I was an angry young black soldier when I came into that camp, and I was wondering why I was fighting this war, but now a transformation had taken place,” Bass says. “Something had changed me. And I realized, human suffering is not relegated to just me.”

African American soldiers who were stationed in Germany after the war experienced a situation that was completely new to them. They were served in restaurants, they could have relationships with white women, and for the first time in their lives they discovered what it was like to be respected. For these soldiers, it was a defining experience.

As a young lieutenant in the army, Gen. Powell was stationed in Germany in 1959 when he experienced what he called in his autobiography a “breath of freedom.” He remarks in the film, how despite the gains being made in the U.S. at the time, black soldiers “were in many ways better off when we were stationed in Germany.”

After serving in World War II, Medgar Evers returned home to Mississippi and became one of the state’s leading Civil Rights activists. His wartime experiences gave him skills he put to good use in organizing for change, but his growing prominence also made him a target. On June 12, 1963, Evers was shot and killed outside of his home in Jackson – ironically, by another World War II veteran who was white.

Another young Civil Rights activist, Congressman John Lewis, often risked his life, at times side by side with veterans. In the film he comments, “These black veterans identified with the civil rights movement and became a part of it. They felt, that they had gone abroad fighting for democracy and equality. And now we have to come back home and fight again. And they did fight.”