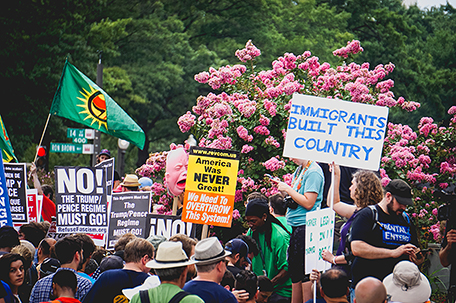 President Donald Trump’s “sh*thole countries” comment about Haiti and various African nations has come back to haunt him as a federal judge considers a lawsuit against Trump’s immigration policy.

Chen heard more than two hours of arguments in the case brought by immigrants from Sudan, Haiti, Nicaragua, and El Salvador, all of whom are here legally.

TPS grants temporary legal status in the United States to people with no serious criminal records who fled catastrophes, such as major earthquakes, in their home country. The immigrants’ status is up for renewal every 18 months. Trump wants to terminate TPS for 98 percent of those who held it when he took office.

During the hearing, the judge noted a newly disclosed document from Trump’s former Homeland Security Secretary Elaine Duke, which stated that the administration’s TPS policy is guided by the president’s “America First view.”

Chen said that principle could be interpreted as “ending immigration status for those who are non-White,” pointing to Trump’s “sh*thole countries” remark that he made while discussing immigration policy with his staff. A week later, the administration announced the termination of protected status for Haitians.

Previous administrations had no problem renewing TPS status for ongoing hardships in the recipient’s home country — even if the hardships were unrelated to the original reason for granting TPS status.

But the Trump administration wants to break with the past by sending folks back home if it feels that the original disaster no longer exists, refusing to renew status for a different hardship.

Chen sided with the immigrants in June when the administration asked the court to dismiss the lawsuit. He’s expected to rule in November on whether to block Trump from expelling up to 1,000 Sudanese people. Deportations to the other three countries are scheduled through 2019.