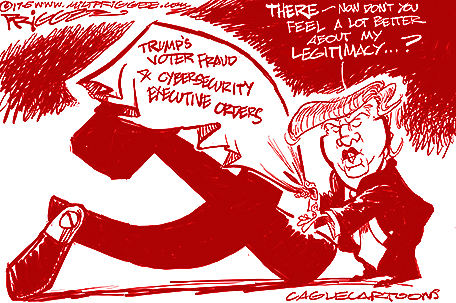 By Adam Kealoha and Holly Ramer

OKLAHOMA CITY — President Donald Trump is upset that all states aren’t fully cooperating with his voting commission’s request for detailed information about every voter in the United States.

Some of the most populous ones, including California and New York, are refusing to comply. But even some conservative states that voted for Trump, such as Texas, say they can provide only partial responses based on what is legally allowed under state law.

“Numerous states are refusing to give information to the very distinguished VOTER FRAUD PANEL. What are they trying to hide?” Trump said in a tweet Saturday.

Given the mishmash of information Trump’s commission will receive, it’s unclear how useful it will be or what the commission will do with it. Trump established the commission to investigate allegations of voter fraud in the 2016 elections, but Democrats have blasted it as a biased panel that is merely looking for ways to suppress the vote.

New Hampshire Secretary of State Bill Gardner, a Democrat who is a member of Trump’s Presidential Advisory Commission on Election Integrity, defended the request Friday. He said the commission expected that many states would only partially comply because open records laws differ from state to state.

“If only half the states agree, we’ll have to talk about that. I think, whatever they do, we’ll work with that,” said Gardner, adding that the commission will discuss the survey at its July 19 meeting.

He said he has received calls from unhappy constituents who said they didn’t want Trump to see their personal information.

“But this is not private, and a lot of people don’t know that,” he said.

White House spokeswoman Sarah Huckabee Sanders blasted the decision by some governors and secretaries of state not to comply.

“I think that that’s mostly about a political stunt,” she told reporters at a White House briefing Friday

It’s not just Democrats bristling at the requested information.

Mississippi Secretary of State Delbert Hosemann, a Republican serving his third term, said in a statement he had not received the commission’s request.

If he does receive it?

“My reply would be: They can go jump in the Gulf of Mexico, and Mississippi is a great state to launch from,” he said. “Mississippi residents should celebrate Independence Day and our state’s right to protect the privacy of our citizens by conducting our own electoral processes.”

In a federal court case after a contentious U.S. Senate primary in Mississippi in 2014, a group called True the Vote sued Mississippi seeking similar information about voters. Hosemann fought that request and won.

No state election official planned to provide the commission with all of the information requested – even Kansas, where commission vice chairman Kris Kobach is secretary of state. He sent the letter asking for the names, party affiliations, addresses, voting histories, felony convictions, military service and the last four digits of Social Security numbers for all voters.

A spokeswoman for Kobach’s office said the last four digits of Social Security numbers are not publicly available under Kansas law and would not be handed over. That was the case in many other states, noted in statements from top election officials and responses to queries from reporters for The Associated Press.

Officials in 10 states and the District of Columbia said they would not comply at all with the request. Those states are California, Kentucky, Massachusetts, Minnesota, Mississippi, New Mexico, New York, South Dakota, Tennessee and Virginia.

Oklahoma, where nearly two-thirds of the vote in the November presidential election went to Trump, will provide nearly all the commission’s request, save for one bit of information: Social Security numbers.

“That’s not publicly available under the laws of our state,” said Bryan Dean, spokesman for the Oklahoma State Election Board.

Dean said the commission’s request will be treated like any other from the general public. The election board will tell the panel to fill out an online form asking for the information. Oklahoma’s voter roll is routinely provided to political campaigns, the press and other groups that ask for it.

The letter from the presidential commission gives secretaries of state about two weeks to provide the voter data and other information, including any evidence of fraud and election-related crimes in their states. It also asks for suggestions on improving election security.

Some Democratic officials have refused to comply with the data request, saying it invades privacy and is based on false claims of fraud. Trump, who created the commission through executive order in May, lost the popular vote to Democrat Hillary Clinton but has alleged without evidence that up to 5 million people voted illegally.