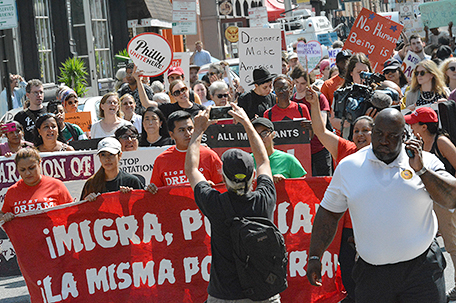 WASHINGTON — President Donald Trump has begun dismantling Barack Obama’s program protecting hundreds of thousands of young immigrants who were brought into the country illegally as children.

He declared on Tuesday that he loves the “dreamers” who could face deportation but insisted it’s up to Congress, not him, to address their plight.

Trump didn’t specify what he wanted done, essentially sending a six-month time bomb to his fellow Republicans in Congress who have no consensus on how to defuse it.

On Twitter Tuesday night, he wrote: “Congress now has 6 months to legalize DACA (something the Obama Administration was unable to do). If they can’t, I will revisit this issue!”

The president tried to have it both ways with his compromise plan: fulfilling his campaign promise to eliminate the Deferred Action for Childhood Arrivals program, or DACA, while at the same time showing compassion for those who would lose deportation protection and the ability to work legally in the U.S. New applications will be rejected and the program will be formally rescinded, but the administration will continue to renew existing two-year work permits for the next six months, giving Congress time to act.

“I have a love for these people and hopefully now Congress will be able to help them and do it properly,” Trump told reporters.

Yet at the same time, the White House distributed talking points to members of Congress that included a dark warning: “The Department of Homeland Security urges DACA recipients to use the time remaining on their work authorizations to prepare for and arrange their departure from the United States.”

Although Trump’s announcement had been anticipated in recent days, it still left young people covered by the DACA program reeling.

“You just feel like you are empty,” said a sobbing Paola Martinez, 23, who came to the U.S. from Colombia and recently graduated with a civil engineering degree from Florida International University

Their predicament now shifts to Congress, which has repeatedly tried – and failed – to pass immigration legislation.

White House Press Secretary Sarah Huckabee Sanders said the president would look to Congress to pass a “responsible immigration reform package” with money to control the border with Mexico and better protect American workers’ jobs – along with protecting “dreamers.”

Sen. John Cornyn of Texas, the No. 2 Senate Republican, said if Trump truly wants a comprehensive immigration reform package, including a solution for the 11 million immigrants in the country illegally, he’s certain to be disappointed. Congress tried that and failed in 2013, and GOP leaders immediately ruled it out Tuesday.

If the goal is a more incremental package that combines a solution for the “dreamers” with steps such as visa reforms and enhanced border security, “there may be a deal to be had,” Cornyn said.

Sanders’ offered a blunt warning to lawmakers skeptical they can come up with a plan: “If they can’t, then they should get out of the way and let somebody else take their job that can actually get something done.”

The DACA program was created by former President Barack Obama by executive order in 2012, when it became clear Congress would not act to address the young immigrants’ plight in legislation that was dubbed the “Dream Act.” Trump ran his campaign as an immigration-hard liner, labeling DACA as illegal “amnesty” and pledging to repeal it immediately.

But he shifted his approach after the election, expressing sympathy for the “dreamers,” many of whom were brought to the U.S. by their parents when they were very young and have no memories of the counties where they were born.

Trump’s aides painted his move to gradually phase out the program as the best of bad options: State officials had threatened a lawsuit if he did not act by Tuesday to repeal the program, which has given nearly 800,000 young immigrants a reprieve from deportation and the ability to work legally in the U.S. in the form of two-year, renewable work permits.

“In effect, I am not going to just cut DACA off, but rather provide a window of opportunity for Congress to finally act,” Trump said. He said he was not in favor of punishing children for the actions of their parents, but he added, “Young Americans have dreams, too.”

Lawmakers were trickling back to the Capitol Tuesday from a summer recess and already are confronting a daunting to-do list including a relief package for Hurricane Harvey victims and a pressing need to raise the federal borrowing limit. Some GOP lawmakers and aides are discussing the possibility of a bipartisan immigration package, including a solution for the dreamers, money for border security and enforcement, and perhaps other items like changes to some visa programs.

A stand-alone bill addressing just the “dreamers” seems unlikely to pass the House, given the firm stance of many conservatives. And it’s unclear whether Trump would sign it anyway.

House Speaker Paul Ryan said he hoped the “House and Senate, with the president’s leadership, will be able to find consensus on a permanent legislative solution that includes ensuring that those who have done nothing wrong can still contribute as a valued part of this great country.”

Under the phase-out plan announced by Attorney General Jeff Sessions, the Department of Homeland Security was halting acceptance of new applications under DACA as of Tuesday. People with permits set to expire between now and March 5, 2018, will be able to re-apply as long as their applications are submitted by Oct. 5. Existing permits will remain in effect, and applications already in the pipeline will be processed.

That means the earliest that dreamers would begin to lose protections under the program would be next March.

Obama slammed the decision as “wrong,” ‘’self-defeating” and “cruel.”

House Democratic leader Nancy Pelosi called it “a deeply shameful act of political cowardice and a despicable assault on innocent young people in communities across America.”

Some Republicans objected, too.

Sen. John McCain of Arizona said Trump was taking “the wrong approach,” and he added: “The federal government has a responsibility to defend and secure our borders, but we must do so in a way that upholds all that is decent and exceptional about our nation.”

One bill addressing the issue that has received significant attention, introduced by Sens. Lindsey Graham, (R-S.C.), and Dick Durbin, (D-Ill.), would allow young immigrants who grew up in the U.S. to earn lawful permanent residence and eventually American citizenship if they complete a list of requirements.

Trump’s announcement came the same day as a deadline set by Republican state officials who said they would challenge DACA in court unless the administration rescinded it. Administration officials argued the program was on flimsy legal footing – and said that allowing the lawsuit to proceed would have thrown it into far more chaos than phasing it out.

After Trump’s announcement, attorneys general in New York and California said they were prepared to seek legal action against his decision.