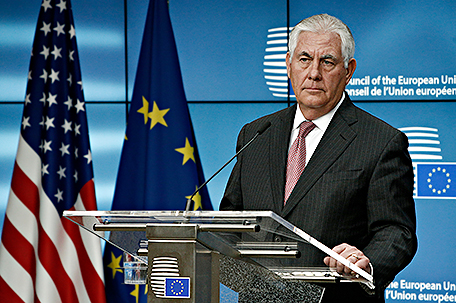 By Josh Lederman and Matthew Lee

WASHINGTON — President Donald Trump fired Secretary of State Rex Tillerson on Tuesday and said he would nominate CIA Director Mike Pompeo to replace him, putting an ardent foe of the Iran nuclear deal in charge of U.S. diplomacy as Trump also dives into high-stakes talks with North Korea.

“We disagreed on things,” Trump said of Tillerson just after announcing the firing on Twitter. He mentioned differences over how to handle the Iran-nuclear deal, which Trump wanted to withdraw from. “So we were not really thinking the same.”

Though Trump and other officials said he’d been considering replacing Tillerson for some time, the president said he made the decision only recently and “by myself.” Tillerson will be “much happier now,” Trump said.

Word of Trump’s dissatisfaction with Tillerson and plans to replace him with Pompeo had circulated for months, even as Tillerson insisted he didn’t plan to leave and that he knew of no plans for his ouster. Rumors about friction between Trump and Tillerson increased last fall with reports that Tillerson had called the president a “moron” while meeting with other officials.

The changes come as Trump considers whether to withdraw the U.S. from the 2015 Iran deal that Pompeo has called “disastrous.” Tillerson had long pushed Trump to remain in the agreement and had been pursuing a delicate strategy with European allies and others to try to improve or augment it to Trump’s liking.

The president said he was nominating the CIA’s deputy director, Gina Haspel, to take over for Pompeo at the intelligence agency. If confirmed, Haspel would be the CIA’s first female director

Pompeo, a former Republican congressman from Kansas, has already been confirmed by the Senate for his current role at the CIA, making it extremely likely that he will be confirmed for the State Department role. Trump tweeted, “He will do a fantastic job!”

Two White House officials said Tillerson was told he was out on Friday, although it was unclear who did the firing. Undersecretary of State Steve Goldstein said Tillerson “did not speak to the president and is unaware of the reason,” adding that the former Exxon Mobil CEO “had every intention of staying” in the job because he felt he was making critical progress in national security.”

Tillerson’s firing came barely four hours after he returned to Washington from a trip to Africa that he had cut short, telling reporters that he was exhausted after working most of the night two nights in a row and getting sick in Ethiopia. There were no obvious signs from his behavior or his aides on the plane that his departure was imminent.

“I felt like, look, I just need to get back,” Tillerson said on his plane, only hours before Trump announced he was out.

Tillerson out at State, to be replaced by CIA chief Pompeo