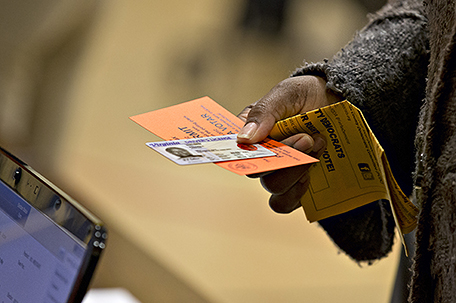 RICHMOND, Va. — A 69-year-old black woman who grew up in a small, segregated city wept on the witness stand Monday as she testified about the trouble she had voting in 2014 because she could not comply with Virginia’s voter identification law.

Josephine Okiakpe said she plucked several forms of ID from her purse – birth certificate, Social Security card, voter registration card, even a bank statement – and handed them over to workers at her Woodbridge polling place. The only things she had with her picture on them were her North Carolina driver’s license and an expired Virginia Department of Motor Vehicles ID card.

“They wouldn’t take any of that,” said Okiakpe, who earlier had described attending an all-black public school in Clinton, North Carolina, that got hand-me-down books when the white schools got new ones.

As she haggled with the poll workers, she said some other voters looked at her and snickered.

“I felt very frustrated, very upset,” she said, trying to fight back tears.

Okiakpe was the first witness in the Virginia Democratic Party’s lawsuit challenging the state’s 2013 law requiring voters to show a valid photo ID at the polls. The trial before U.S. District Judge Henry Hudson is expected to last at least a week. The outcome will not affect the state’s March 1 presidential primaries.

The plaintiffs claim the photo ID law is unconstitutional because it suppresses voting by blacks, Latinos and young people – voters who tend to support Democrats. Their attorney, Bruce Spiva, said in his opening statement that Republicans deliberately passed a discriminatory law because they saw the state’s demographics shifting to their detriment after President Barack Obama carried Virginia in back-to-back elections.

Mark F. Hearne II, an attorney for the Virginia election officials named as defendants, argued that the law is a “racially neutral” attempt to prevent voter fraud and inspire public confidence in elections.

Hearne said that some voters might be inconvenienced by the photo ID requirement, but people are not being disenfranchised. He said the mandate has broad public support, and Virginia has a more lenient photo ID law than many of the more than 30 states that have enacted such measures.

Lawsuits challenging photo ID laws are pending in several other states. A six-day trial on North Carolina’s law wrapped up Feb. 1, and the judge is expected to rule in a few weeks.

Okiapke testified that she was given a provisional ballot that was counted only after she obtained a new photo ID at the voter registrar’s office in Manassas and produced it a few days after the election.

Another witness, Meghan Cotten of Arlington, said she was not even offered a provisional ballot after being told that her Alabama driver’s license was not a valid form of ID under the Virginia law. Cotten, a 32-year-old public relations representative, said people turned and stared after a poll worker loudly expressed surprise that she did not have a passport.

“It was pretty humiliating, to be honest,” Cotten said. “It was very hard to be singled out.”

She left without voting.

Spiva said there are tens of thousands of other registered voters who do not have current Virginia driver’s licenses, work ID badges or other forms of photo identification accepted at Virginia polling places. Virginians can obtain free photo IDs at voter registrar offices, just as Okiapke did, but Spiva said the state has done little to spread the word.