Treatment for mom accused of driving kids in ocean 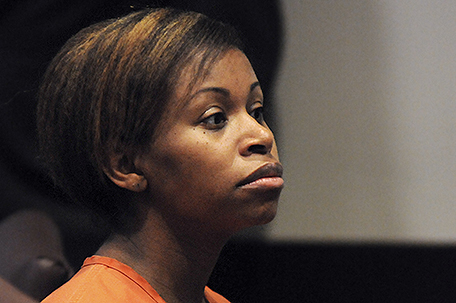 ABOVE PHOTO:  Ebony Wilkerson listens during a bond hearing in Daytona Beach, Fla., Tuesday, March 25, 2014. Wilkerson, 32, the pregnant South Carolina woman charged with attempted murder after she drove her car into the ocean with her three children inside, will be allowed to receive in-hospital psychiatric care until a doctor says she’s fit to return to jail, according to an agreement announced Tuesday.

DAYTONA BEACH, FLA. — A pregnant South Carolina woman charged with attempted murder after she drove her car into the ocean with her three children inside will be allowed to receive in-hospital psychiatric care until a doctor says she’s fit to return to jail, according to an agreement announced Tuesday.

Ebony Wilkerson, 32, earlier this month drove her minivan into the surf off Daytona Beach, Fla., and bystanders and officers helped pull her and her children – ages 3, 9 and 10 – from inside as it was almost submerged. According to a charging affidavit, one of her children told detectives that “Mom tried to kill us.”

Wilkerson’s hospital treatment started about two weeks ago and includes group therapy sessions, said her public defender Jim Purdy said. She had been in isolation, but now will be allowed the recreational exercise time.

“Now she can at least have some contact with other people,” Purdy said.

Both the state and defense announced the treatment agreement during a 10-minute bond hearing. It was a continuation of a hearing that began last week. Judge Leah Case wanted to hear more testimony before making a decision.

Part of the agreement includes a 24-hour notice from Wilkerson’s doctor to prosecutors, defense and the jail, when she is medically fit to return to jail. That return also can’t take place on Friday, Saturday or Sunday.

Wilkerson’s defense attorneys agreed to withdraw a request to reduce her $1.2 million bond on three for attempted murder and three child abuse charges, all felonies. They can re-file it later.

“Both the state and the defense have an interest in making sure that Miss Wilkerson receives the care that she is receiving right now,” Purdy said afterward. “That is what our goal is, to basically make sure that while this case is pending that she is stabilized and she has the treatment she is currently receiving, and it continues until it is no longer necessary.”

Wilkerson has denied trying to hurt her children, telling investigators she was driving too close to the water, “and the waves pulled her in,” according to the charging affidavit. The children also told authorities they went to Florida to try to escape their father and described a history of violence between their parents.

Dollie Wilkerson, who said she was Ebony Wilkerson’s aunt, said after the hearing she was happy the attorneys came to the agreement.

“My niece needs help. She doesn’t need to be in jail,” she said. “She needs to be where she is. She knows it. Everybody knows it. And we hope she gets the treatment she needs.”

A beach safety officer who helped rescue the family reported Wilkerson looked fatigued and her speech was confusing when he interviewed her in the hospital where she had been taken.

He said he could not elaborate on her prognosis without violating doctor and patient confidentiality.

On the issue of her bond, Purdy said that because the motion was withdrawn without prejudice, it allows the defense the option to raise the issue again later. He said that will be a decision that will be made based on how the case progresses.

“The bond is irrelevant right now. It could be no bond, it could be $1.2 million, it could be $1,000,” Purdy said. “The problem is right now she needs to be where she is. She knows it, everybody knows it, and we’re just hoping she gets the treatment that she needs.”

Purdy said that Wilkerson is about seven months pregnant and that she will also receive prenatal care because she is a “high-risk pregnancy.” He said part state’s agreement about the medical care arose because it also has “an interest in making sure that her health and the health of this unborn child are taken care of.”