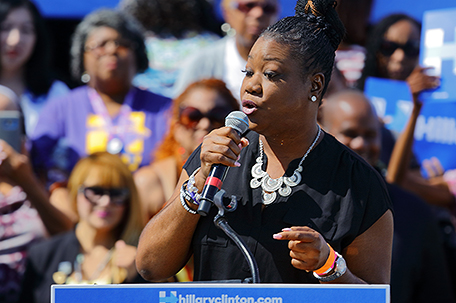 ABOVE PHOTO: Sybrina Fulton (mother of Trayvon Martin) speaks at Democratic presidential candidate Hillary Clinton’s Get Out The Vote rally in 2016, at Leimert Park Village Plaza. Fulton is running for a county commissioners’ seat in Miami-Dade County. (Photo: Shutterstock)

MIAMI—  A mother who turned to activism after the slaying of her Black teen son Trayvon Martin has announced she is running for office in Miami.

The Miami Herald reports Sybrina Fulton will be entering the race to join the 13-member board of Miami-Dade County commissioners.

Fulton said in a Saturday statement that she would continue working to end gun violence. She will challenge Miami Gardens Mayor Oliver Gilbert for the seat that is up for grabs in 2020 because of term limits.

Trayvon’s parents head a foundation and have been recognized for their work on gun reform and social justice.

Trayvon was unarmed when shot dead by neighborhood watch volunteer George Zimmerman, who was later acquitted on the grounds of self-defense. His death sparked the Black Lives Matter movement.