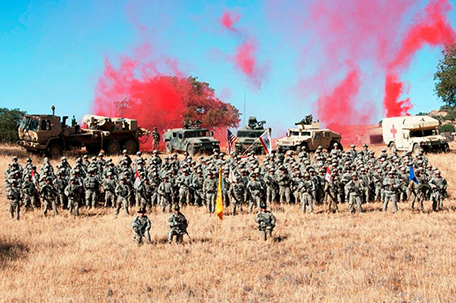 WASHINGTON — Short of troops to fight in Iraq and Afghanistan a decade ago, the California National Guard enticed thousands of soldiers with bonuses of $15,000 or more to reenlist and go to war.

Now the Pentagon is demanding the money back.

Nearly 10,000 soldiers, many of whom served multiple combat tours, have been ordered to repay large enlistment bonuses — and slapped with interest charges, wage garnishments and tax liens if they refuse — after audits revealed widespread overpayments by the California Guard at the height of the wars over the last decade.

Investigations have determined that lack of oversight allowed for widespread fraud and mismanagement by California Guard officials under pressure to meet enlistment targets.

But soldiers say the military is reneging on 10-year-old agreements and imposing severe financial hardship on veterans, whose only mistake was to accept bonuses offered when the Pentagon needed to fill the ranks.

“These bonuses were used to keep people in,” said Christopher Van Meter, a 42-year-old former Army captain and Iraq veteran from Manteca, Calif., who says he refinanced his home mortgage to repay $25,000 in reenlistment bonuses and $21,000 in student loan repayments that the Army says he should not have received. “People like me just got screwed.”

In Iraq, Van Meter was thrown from an armored vehicle turret — and later awarded a Purple Heart for his combat injuries — after the vehicle detonated a buried roadside bomb.

“They’ll get their money, but I want those years back.”— Susan Haley, former Army master sergeant

Susan Haley, a Los Angeles native and former Army master sergeant who deployed to Afghanistan in 2008, said she sends the Pentagon $650 a month — a quarter of her family’s income — to pay down $20,500 in bonuses that the Guard says were given to her improperly.

“I feel totally betrayed,” said Haley, 47, who served 26 years in the Army along with her husband and oldest son, a medic who lost a leg in combat in Afghanistan.

Haley, who now lives in Kempner, Texas, worries they may have to sell their house to repay the bonuses. “They’ll get their money, but I want those years back,” she said, referring to her six-year reenlistment.

The problem offers a dark perspective on the Pentagon’s use of hefty cash incentives to fill its all-volunteer force during the longest era of warfare in the nation’s history.

Even Guard officials concede that taking back the money from military veterans is distasteful.

“At the end of the day, the soldiers ended up paying the largest price,” said Maj. Gen. Matthew Beevers, deputy commander of the California Guard. “We’d be more than happy to absolve these people of their debts. We just can’t do it. We’d be breaking the law.”

Facing enlistment shortfalls and two major wars with no end in sight, the Pentagon began offering the most generous incentives in its history to retain soldiers in the mid-2000s.

It also began paying the money up front, like the signing bonuses that some businesses pay in the civilian sector.

“It was a real sea change in how business was done,” said Col. Michael S. Piazzoni, a California Guard official in Sacramento who oversaw the audits. “The system paid everybody up front, and then we spent the next five years figuring out if they were eligible.”

The bonuses were supposed to be limited to soldiers in high-demand assignments like intelligence and civil affairs or to noncommissioned officers badly needed in units due to deploy to Iraq or Afghanistan.

The National Guard Bureau, the Pentagon agency that oversees state Guard organizations,  has acknowledged that bonus overpayments occurred in every state at the height of the two wars.

But the money was handed out far more liberally in the California Guard, which has about 17,000 soldiers and is one of the largest state Guard organizations.

In 2010, after reports surfaced of improper payments, a federal investigation found that thousands of bonuses and student loan payments were given to California Guard soldiers who did not qualify for them, or were approved despite paperwork errors.

Army Master Sgt. Toni Jaffe, the California Guard’s incentive manager, pleaded guilty in 2011 to filing false claims of $15.2 million and was sentenced to 30 months in federal prison. Three officers also pleaded guilty to fraud and were put on probation after paying restitution.

Instead of forgiving the improper bonuses, the California Guard assigned 42 auditors to comb through paperwork for bonuses and other incentive payments given to 14,000 soldiers, a process that was finally completed last month.

Roughly 9,700 current and retired soldiers have been told by the California Guard to repay some or all of their bonuses and the recoupment effort has recovered more than $22 million so far.

Because of protests, appeals and refusal by some to comply, the recovery effort is likely to continue for years.

In interviews, current and former California Guard members described being ordered to attend mass meetings in 2006 and 2007 in California where officials signed up soldiers in assembly-line fashion after outlining the generous terms available for six-year reenlistments.

“I signed a contract that I literally risked my life to fulfill.”— Robert Richmond, former Army sergeant first class

Robert Richmond, an Army sergeant first class then living in Huntington Beach, said he reenlisted after being told he qualified for a $15,000 bonus as a special forces soldier.

The money gave him “breathing room,” said Richmond, who had gone through a divorce after a deployment to Afghanistan in 2002 and 2003.

In 2007, his special forces company was sent to the Iraqi town of Hillah, 60 miles south of Baghdad in an area known as the “Triangle of Death” because of the intense fighting.

Richmond conducted hundreds of missions against insurgents over the next year. In one, a roadside bomb exploded by his vehicle, knocking him out and leaving him with permanent back and brain injuries.

He was stunned to receive a letter from California Guard headquarters in 2014 telling him to repay the $15,000 and warning he faced “debt collection action” if he failed to comply.

Richmond should not have received the money, they argued, because he already had served 20 years in the Army in 2006, making him ineligible.

Richmond, 48, has refused to repay the bonus. He says he only had served 15 years when he reenlisted, due to several breaks in his Army service.

He has filed appeal after appeal, even after receiving a collection letter from the Treasury Department in March warning that his “unpaid delinquent debt” had risen to $19,694.62 including interest and penalties.

After quitting the California Guard so the money wouldn’t be taken from his paycheck, he moved to Nebraska to work as a railroad conductor, but was laid off.

He then moved to Texas to work for a construction company, leaving his wife and children in Nebraska. With $15,000 debt on his credit report, he has been unable to qualify for a home loan.

“I signed a contract that I literally risked my life to fulfill,” Richmond said bitterly. “We want somebody in the government, anybody, to say this is wrong and we’ll stop going after this money.”

Though they cannot waive the debts, California Guard officials say they are helping soldiers and veterans file appeals with the National Guard Bureau and the Army Board for Correction of Military Records, which can wipe out the debts.

But soldiers say it is a long, frustrating process, with no guarantee of success.

Robert D’Andrea, a retired Army major and Iraq veteran, was told to return a $20,000 bonus he received in 2008 because auditors could not find a copy of the contract he says he signed.

Now D’Andrea, a financial crimes investigator with the Santa Monica Police Department, says he is close to exhausting all his appeals.

“Everything takes months of work, and there is no way to get your day in court,” he said. “Some benefit of the doubt has to be given to the soldier.”

Guard officials told Strother he had voided his enlistment contract by failing to remain a radio operator, his assigned job, during and after a 2007-08 deployment to Iraq.

Strother filed a class-action lawsuit in February in federal district court in Sacramento on behalf of all soldiers who got bonuses, claiming the California Guard “conned” them into reenlisting.

The suit asked the court to order the recovered money to be returned to the soldiers and to issue an injunction against the government barring further collection.

In August, Strother received a letter from the Pentagon waiving repayment of his bonus.

“We believe he acted in good faith in accepting the $15,000,” a claims adjudicator from the Pentagon’s Defense Legal Services Agency wrote in the letter. He still owed $5,000 in student loan repayments, it said.

Within weeks, lawyers for U.S. Atty. Phillip A. Talbert in Sacramento petitioned the court to dismiss Strother’s lawsuit, arguing that it was moot since most of his debt had been waived. A federal judge is supposed to rule on the government’s motion by January.

“It’s a legal foot-dragging process to wear people out and make people go away,” said Strother. “It’s overwhelming for most soldiers.”

Indeed, some have just given up, repaying the money even before exhausting their appeals.

“It was tearing me up, the stress, the headaches,” said Van Meter, the former Army captain from Manteca who paid off his $46,000 debt by refinancing his mortgage. “I couldn’t take it anymore. The amount of stress it put us through financially and emotionally was something we wanted to move past.”

CNN reported Wednesday, that Secretary of Defense Ash Carter said he is suspending “all efforts to collect reimbursement” from improperly awarded enlistment bonuses given to some members of the California National Guard, following outrage from veterans and their families over attempts to recover the money 10 years after it was disbursed.

“I have ordered the Defense Finance and Accounting Service to suspend all efforts to collect reimbursement from affected California National Guard members, effective as soon as is practical,” Carter said in a statement, adding this suspension will continue until “I am satisfied that our process is working effectively.”

“There is no more important responsibility for the Department of Defense than keeping faith with our people,” Carter added in his statement, adding, “While some soldiers knew or should have known they were ineligible for benefits they were claiming, many others did not.”

New questions about whether African child soldiers secured U. S. bases in Iraq