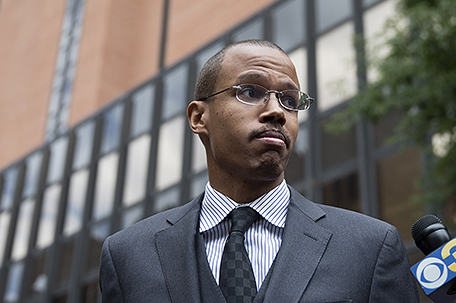 While handing down a five-year sentence on Chaka “Chip” Fattah Jr., Judge Henry Bartle III took the time to lecture him on how his life choices led to his wasting his talent.

U.S. District Judge Henry Bartle III didn’t let his disappointment with the defendant standing before him, Chaka “Chip” Fattah Jr., the son of Congressman Chaka Fattah, show on his face.

Before he handed down Fattah’s sentence on the 22 counts of bank fraud, tax evasion and other related offenses he was convicted of late last year, Bartle had more than a few words for him.

“You had opportunities and advantages that most young people would dream about and you used them to commit criminal offenses,” Bartle said. “You’ve made a plethora of bad choices of your own free will.”

“You cheated clients, filed false tax returns, and most egregiously, you stole from the School District of Philadelphia, cheating our neediest children,” Bartle continued. “You can’t claim hardship, that you had a bad childhood, or that the streets made you do it. There are no mitigating circumstances here.”

And with that, Fattah was sentenced to five years in federal prison. In addition to the jail time, he was given five years supervised release and ordered to pay $1.1 million in restitution to a variety of creditors including Citizen’s Bank, United Bank of Philadelphia, Wells Fargo bank, and the School District of Philadelphia, an entity that Fattah was convicted of stealing close to $1 million from alone.

Assistant U.S. Attorney Paul Gray used the theft from the School District as part of his request to sentence the man who he defeated at trial (Fattah represented himself) to the harshest sentence possible.

Through the company that Fattah and former roommate Matthew Amato ran, he got money to provide counseling and other services to Delaware Valley High School, a for-profit company that runs alternative high schools for at-risk students, he instead pocketed the money and used it on a variety of things including trips, an apartment in the Residences at the Ritz-Carlton in Center City and a $45,000 BMW.

“He didn’t do what he was supposed to do with that money, and then bragged about it,” Gray said. “He didn’t care about his victims. All he cared about was making money and having fun. He deserves no leniency whatsoever.”

In his defense, Fattah said he didn’t realize that so much of what he was convicted of was against the law.

That, and how his life has been impacted since the raid on his apartment, and the trial that resulted from it, should be taken into consideration when it comes to sentencing, Fattah said.

“I lost my apartment and have been living with my family,” Fattah said. “I’ve lost my friends. I’ve lost money and my reputation, which was good before this. I’ve been sued. I have seriously suffered prior to going to trial in this case.”

Judge Bartle bought none of it. When he asked if he could remain free as he appealed both his sentence and the guilty verdict, Fattah was given a resounding no in the form of the U.S. Marshalls that took him into custody.

After leaving the courtroom, a saddened Congressman Fattah bemoaned the imprisonment of his only son, saying that a lot of things were said that had nothing to do with the offense for which he was convicted. He also said that media coverage of the investigation made it impossible for his son to get a fair trial and was aimed at smearing his family’s name.

The Congressman faces a trial of his own in May on charges of misusing federal grant funds, campaign donations and charitable gifts to enrich himself and others.

He’ll also be going before Judge Bartle, but believes he won’t share his son’s fate.

“We’ll be in another courtroom and I believe we’ll see a different result,” Congressman Fattah said. “I’m a man of great faith and my family is strong.”