The Return Of Barack 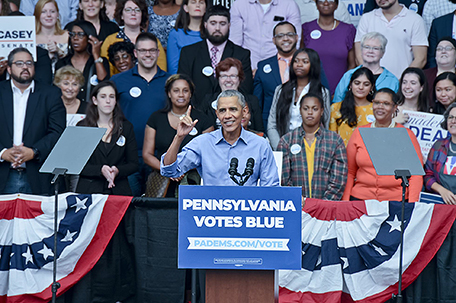 At a time when things are more than a little crazy, it’s nice to hear that everything is going to be okay from an old reassuring friend that you trust because he or she has rarely steered you wrong.

On Friday, one of Philadelphia’s old friends stopped by the Dell Music Center in North Philadelphia to reassure Pennsylvanians that everything is going to be okay…as long as they get out and vote on November 6.

Former President Barack Obama came to the Dell to get on the stump for the Commonwealth’s Democratic candidates. From state house races to Congressional races to the Governor’s Race, the former president talked up his fellow travelers and encouraged a still adoring public to get registered to vote and bring their friends with them while they’re at it.

“My message is really simple,” he said. “Vote. This year’s elections are the most important we’ve had in a long time. The stakes are higher and the consequences of sitting this out are higher.”

That’s because folks are kind of anxious and an administration with no restraints in Washington are making them even more so, Obama said. At a time when so much effort is being placed on focusing on the ways in which we’re different, these anxieties are making people turn on each other, he said.

Luckily, Pennsylvania has plenty of reasons for you to cast your vote for something, instead of just against something, he said.

“On November 6th, you have the chance to restore some sanity to our politics,” he said. “The biggest threat to our democracy is indifference.” 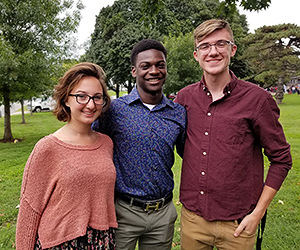 Temple University sophomores and first-time voters Danielle Brodsky, Junior Dufort and Kevin Reeder, all 19, have been galvanized by the current political climate and are actively helping get out the vote ahead of the November 6 midterm election. (Photo: Amy V. Simmons)

Few in the crowd were indifferent. In fact, most of the people at the Dell were there because they had gone out canvassing, phone banking and registering people to vote.

And those who hadn’t done that, were there because the times demanded it.

Sherry Blaine, is concerned about the impact of the current political climate on her daughter and community.

“I think the world has taken a step back 20 years, and it really bothers me,” said Blaine, 52, a social worker from York who is neighbors with both Gov.Tom Wolf and his opponent, Republican Scott Wagner. “My daughter is biracial. She’s in college and I fear for her, and I fear her life with the way things have gone back with race relations. It has given the people who are racist and prejudiced the land to stand, to say that they are and to act on that – that’s what bothers me.”

While she’s not sure that Obama coming to visit will get people like her daughter out to the polls, it can’t hurt, Blaine said.

“It has given us the opportunity to come in crowds and show how we are supportive of people of different backgrounds,” she said. “If you look around, you can see people of different shades, different background, and you know that we are all coming together and feel comfortable coming together. I just think that that is a wonderful thing. Hopefully, that will show the rest of the country that we come together for people [candidates and elected officials] that support us.”

Kevin Reeder, a Temple University sophomore, didn’t get to vote in the 2016 elections, but he intends to be at the polls on November 6. Because he still has the pulse of young people, Obama’s presence makes sense.

“I definitely think that President Obama has come to the scene at the right time,” Reeder said. “I think now is a good time for reaching out to younger people, especially after things like Parkland. Young people are into politics more than ever, in my opinion. I feel like big figures like President Obama coming into the scene right before midterms is extremely important, because it gets more people to vote.”

It was especially important that he came to a predominately African- American area, said Junior Dufort, another Temple sophomore.

“I think it was important for Obama to come, not only to speak, but the area he has come to – predominantly an African- American part of our city,” said Dufort, who is African-American. “I experienced while canvassing that not a lot of African-Americans are voting. So [given] the figure he is, and the power he has, I think it’s really important that he persuades our people to use the rights that we fought so hard for during the Civil Rights Movement to gain.”

Much like many of the young candidates that have won their primary races, Brodsky is convinced that old fashioned, door-to-door outreach to potential voters is the key to success.

The last day to register to vote in the Midterm elections here in Pennsylvania is Oct. 8.

School named after Confederacy’s only president renamed for Barack Obama