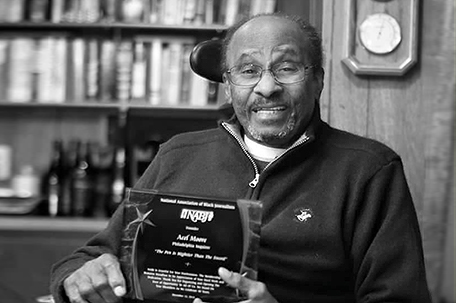 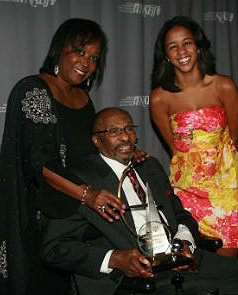 Linda Wright Moore, left, with her husband Acel Moore and their daughter Mariah. Acel was given the Lifetime Achievement Award at the Salute to Excellence Gala during the 2011 National Association of Black Journalists Convention in Philadelphia. Photo courtesy: NABJ

Philadelphia-born and raised, Moore served as an Army medic before becoming a copy clerk at the Philadelphia Inquirer in 1962. Six years later, he became a reporter. He also worked as an investigative reporter, editorial board member and columnist at the paper. Moore won a Pulitzer Prize in 1977 for his investigation of harsh conditions at Farview State Hospital in Pennsylvania. He retired from The Inquirer in 2005 and held the title of associate editor emeritus at the time of his death.

“I am deeply saddened to learn of the death of Acel Moore,” said PABJ President Cherri Gregg. “His shoulders are those on which we stand. Moore is legendary for the quality of his work and the veracity of his commitment to diversifying newsrooms. He was the standard-bearer for so many of us, a true trailblazer, mentor and friend. He believed in advocating for journalists of color, and his death underscores the need for PABJ to continue his legacy.”

Moore became a reporter when the word “black” was not synonymous with “journalist.” One of the first of a handful of blacks in mainstream newspapers (and the media on a whole), he stood up to white editors who insisted on calling him “boy” at a time when it was commonplace to address black men in such a way.

Having worked his way up to reporter, he saw himself as the persistent voice for a community whose lives bore no significance to many of the people who covered the news in his hometown. It was a path he followed for the next four decades, as a chronicler of the black community and a catalyst for increasing the number of journalists of color in America’s newsrooms.

It was in 1973 when Moore sat down with Chuck Stone of the Philadelphia Daily News and Claude Lewis of the Evening Bulletin to coalesce black newspaper and broadcast journalists into an organization that would speak for them and advocate for fair treatment in their newsrooms.

Moore, Stone and Lewis met at the University of Pennsylvania to lay the groundwork for PABJ. Blacks were generally excluded from most journalism organizations, and these three felt it was time to form their own. This was not the first attempt at starting such an organization. In 1968, black journalists in the area had started Black Communicators, which was around for a few years. 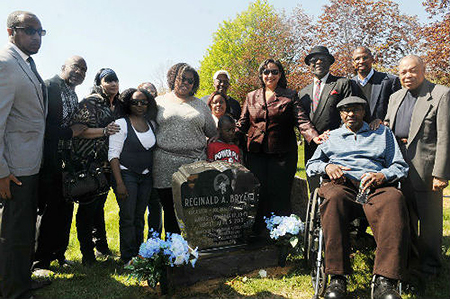 The three journalists sent out letters with stationery bearing their newspapers’ logos to black journalists in the area. They had determined that there were about 120 in all media from Trenton to Wilmington.

“It was an attempt from the beginning to increase our numbers, to be in a position to tell our own stories, to be a pressure point inside the industry,” Moore said in 2003 on the 30th anniversary of PABJ.

This new organization was named “the Association of Black Journalists.” Stone was elected president, and artist Earl E. Davis created the logo. The members held an annual banquet with national speakers, community workshops on assessing the media and lunches with newsmakers. They spoke up for members who were not treated fairly in their newsrooms, Moore once said, actions that led other black organizations to perceive them a “militant.”

“I was blown away by Acel’s deep devotion to the next generation of journalists. After both our careers in daily journalism ended, Acel and I co-founded Prime Movers Media Philadelphia, an intensive journalism mentoring program within the Philadelphia Public Schools that still exists nearly ten years later,” said former NABJ President Dorothy Butler Gilliam. “Even with startup funds from the Knight Foundation, we still needed Acel’s sterling reputation to open the superintendent’s doors in that problem-ridden school system. Acel and I had many adventures with this program.  He was a fighter, an innovator, full of fun and a great journalist.  I loved him very much.”

To honor Moore for his years of service, the NABJ presented him with its Lifetime Achievement Award in 2011. In his acceptance speech, he talked about the challenges of being a journalist:

“In my life, as in the life of NABJ as an organization, struggle has always preceded progress: you have to push – sometimes push a boulder uphill – to get where you want to go,” he said. “I certainly know that feeling, as I work to regain mobility in physical therapy several times a week. It is a difficult … slow and painful challenge. An uphill battle. But it is a challenge not unlike the challenge facing us as journalists in the 21st century: to look at the world as it is with clear eyes – and then to be strong and determined to uphold and build on the best traditions of our craft in this digital age, with its 24-hour news cycle and demands for more and faster information and analysis.”

Moore was a friend, mentor and colleague to many journalists, particularly journalists of color of who came up through the ranks of PABJ.

I’m heartbroken by the passing of my longtime mentor and friend Acel Moore. He was a counselor, and impacted the careers of hundreds of NABJ members. Moore left us a wonderful legacy as a humanitarian, truth seeker, fighter for equal opportunity and trailblazer who opened doors for countless journalists, especially those of color. We will honor his memory by continuing the fight for diversity in all newsrooms now more than ever.

PABJ sends its deepest condolences to the Moore family, including wife Linda and daughter Mariah, and son Acel Jr. The Moore family will celebrate Moore’s life and legacy on Monday, Feb. 22, 2016, at Grace Baptist Church of Germantown, 25 W. Johnson St. The viewing will be held from 9 a.m. to 11 a.m., followed by services. Moore will be buried at Ivy Hill Cemetery.

If you have personal reflections, memories or photos of Acel Moore that demonstrate how he impacted your life or career, please email [email protected] and we will include them. 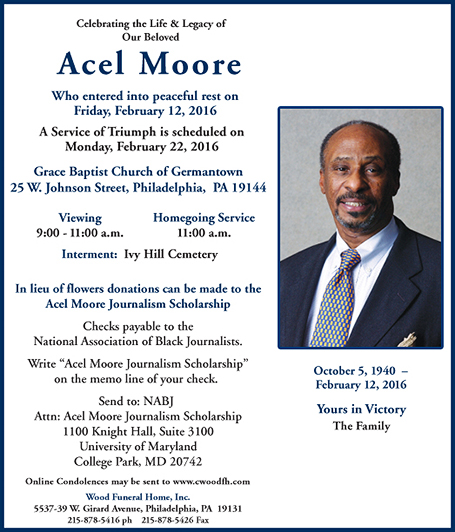