The Importance of Legacy 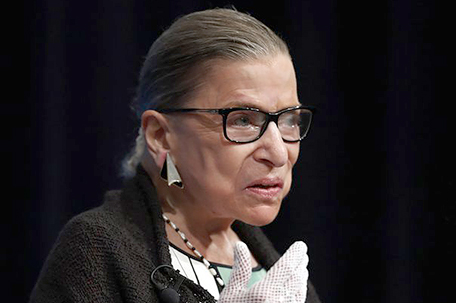 ABOVE PHOTO: Supreme Court Justice Ruth Bader Ginsburg speaking at the Georgetown University Law Center campus in Washington. Ginsburg didn’t put on her judge’s robe without also fastening something around her neck. Ginsburg called her neckwear collars, or jabots, and they became part of her signature style, along with her glasses, lace gloves and fabric hair ties known as scrunchies. (AP Photo/Carolyn Kaster, file

Much of Ruth Bader Ginsburg’s life as a lawyer and a Supreme Court justice was spent making things more equitable for all Americans. Keeping what she did intact will be the challenge for all of us.

“I ask no favor for my sex. All I ask of our brethren is that they take their feet off our necks.”

In an America that often has a problem understanding exactly what “equality for all” means, what Ruth Bader Ginsburg spent all of her career working toward — giving marginalized communities room to breathe, thrive and make their mark — took a lot of patience.

Over her years working for the American Civil Liberties Union, as a professor at the Rutgers University and Columbia Law Schools as an appellate judge and on the Supreme Court, the Notorious R.B.G. did all she could to make America a place where everyone starts at the same place.

For the last few years, Justice Ginsburg had battled a variety of illnesses, including the pancreatic cancer that ultimately killed her. But you would have never known that she was ailing based on how she presented herself.

I mean, her workouts alone made you think that she would be able to achieve her goal of not leaving the court before the Trump Administration ended.

Her strength and character made her someone people wanted to emulate throughout her 27 years on the Supreme Court. In addition to being the author of the United States vs. Virginia decision that allowed women to enroll in military schools like the Virginia Military Academy and The Citadel, Ginsburg’s dissent in Ledbetter v. Goodyear Tire and Rubber Co. eventually led to the Lilly Ledbetter Fair Pay Act, which gave people more room to file pay discrimination cases.

Ginsburg also worked in international law and, believe it or not, learned Swedish to co-author a book on civil procedure in Sweden.

A lot of her work was based in the challenges she had to face in achieving her career. When Ginsburg went to Harvard, she was chastised for taking a spot that should have gone to a man. Getting a clerk’s job was hard to do because of her gender.

Fortunately, she had someone in her corner, her husband Martin. In an interview with National Public Radio, she said “What made Marty so overwhelmingly attractive to me was that he cared that I had a brain.”

The two met as students at Cornell University, married in 1954, stayed together until his death from cancer in 2010 and understood the importance of helping each other. When he got cancer while at Harvard Law School, Ruth took care of their children and took notes for his classes so he wouldn’t fall behind. Once she became a lawyer herself, he took care of the children so she could make history.

Their support of each other was something everyone benefitted from.

“If you have a caring life partner, you help the other person when that person needs it,” Justice Ginsburg said. “I had a life partner who thought my work was as important as his, and I think that made all the difference for me.”

Her dying wish was to see someone other than President Donald Trump fill her seat, even though the President doesn’t believe she said that.

Although Senate Majority Leader Mitch McConnell and his fellow Republicans made up a rule four years ago prohibiting Supreme Court appointments within nine months of a Presidential election, they’ve decided that this rule isn’t going to apply here.

Which means that it’s quite possible that Ginsburg will get the Thurgood Marshall treatment, meaning that just like President George H.W. Bush replaced Marshall with Clarence Thomas, a man who wanted to roll back everything he had worked for, the woman Republicans install in her seat will be against everything the Notorious R.B.G worked for.

And that’s a shame, because a lot of the gains that Ginsburg’s work made for women, people of color, members of the LGBT community and the disabled were things that America should have given us in the first place.

It’s a fight we should all be willing to take on in her memory.

Ruth Bader Ginsburg: The Fight Is Never Over, Not Even After You Lose