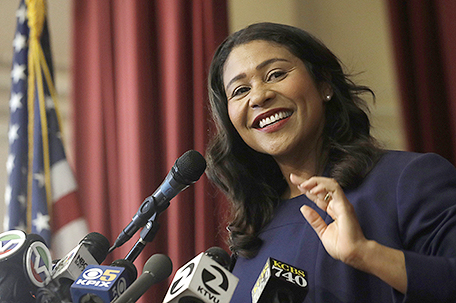 ABOVE PHOTO:  Incoming mayor London Breed smiles while speaking at Rosa Parks Elementary School in San Francisco, Thursday, June 14, 2018. It is now the job of Breed, the first black woman elected mayor of the city, to unite a wealthy but frustrated San Francisco, where the high-tech economy has sent the median price of a home soaring to $1.3 million and where homeless tents and human waste fester on sidewalks. (AP Photo/Jeff Chiu)

African-American women have done impressively well in the 2018 primary season.

Add London Breed to the list of Black women candidates who have made history this year with an election win.

Breed, a former San Francisco supervisor, was declared the winner of the San Francisco mayoral race last Wednesday, making her the first Black woman to hold the office. She had to overcome several obstacles, including a complicated election system and her colleagues on the Board of Supervisors ousting her as interim mayor.

Her narrow victory came eight days after the June 5 special election. The city uses an election system called ranked-choice voting (RCV) in which voters select their top three choices in a race. Her top two rivals made an arrangement aimed at preventing Breed from winning. When Breed failed to garner a majority of votes in the first round, the automatic runoff system was triggered and put her temporarily in second place.

“No matter where you come from, no matter what you decide to do in life, you can do anything you want to do. Never let your circumstances determine your outcome in life,” Breed told supporters after her main opponent conceded, NBC News reported.

So far, Black women have done impressively well in the 2018 primary season. Stacey Abrams won the Democratic primary for governor of Georgia, becoming the first Black woman to be a major party nominee for governor in the United States.

In Virginia, Vangie Williams scored a victory by defeating two military veterans to win the chance in November to become the first Black woman to represent Virginia from the state’s first congressional district. And in a race that flew under the radar, Deidre DeJear beat her Democratic primary rival for Iowa secretary of state. She’s now the first Black woman to win a major party nomination for statewide office in Iowa.

Alabama has been in the spotlight because about 36 Black women ran for various offices, ranging from state board of education to public service commissioner to U.S. House of Representative.

Breed will complete former Mayor Ed Lee’s term, which ends in January 2020. Lee died unexpectedly in December, and Breed, as president of the Board of Supervisors, automatically became interim mayor. But her colleagues on the board, in a 6-3 vote, yanked her from serving as interim mayor. Her outright victory in the special election gives her the position permanently.