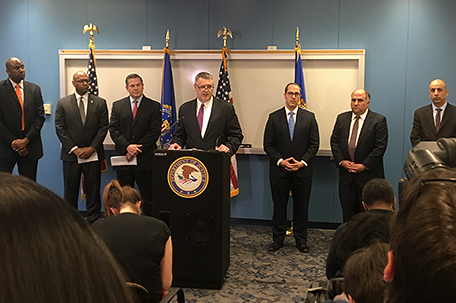 ABOVE PHOTO:  William E. Fitzpatrick, acting U.S. Attorney for the State of New Jersey, surrounded by representatives from the FBI, IRS, and Homeland Security, speaks at the podium regarding Seth Williams’ federal indictment on 23 counts.  (Photo courtesy: Denise Clay)

On Tuesday, District Attorney R. Seth Williams became the latest Philadelphia politico to find himself on the wrong end of a federal indictment.

On Tuesday, a Federal Grand Jury made a 23-count assertion that while he was elected to enforce the laws, following them himself, especially when it comes to public officials and gifts, might not have been his strong suit.

Williams became the latest Philadelphia politician to have a day in court in his future after a Federal Grand Jury indicted him on 23 counts including bribery, extortion and wire fraud Tuesday. He is also charged with defrauding a nursing home caring for a relative speculated to be his mother, Imelda, who is battling Parkinson’s Disease, and family friends who gave him $10,000 toward her care.

On Wednesday, Williams, the city’s first Black district attorney, pled not guilty to the charges at his arraignment before U.S. Magistrate Judge Richard Lloret and was released on $50,000 bail.

Williams didn’t speak to reporters after his arraignment, but his defense attorney, Michael Diamondstein, told 6ABC that the District Attorney “vehemently denies that he compromised any investigation, case or law enforcement function.”

Flanked by investigators from the FBI, the IRS and Homeland Security, William E. Fitzpatrick, acting U.S. Attorney for the State of New Jersey, outlined an extensive pattern of alleged quid pro quo in which Williams traded official access to two business owners—Michael Weiss, co-owner of Woody’s, a watering hole in Philadelphia’s Gayborhood, and Mohammad N. Ali, a Bucks County businessman who sells prepaid phone cards — for a variety of luxury items.

This combination of influence trading and “Lifestyles of the Rich and Famous” led to the Grand Jury’s decision, Fitzpatrick said.

“The indictment alleges that as District Attorney, Mr. Williams compromised himself and his elected office by standing ready to help those who were willing to pay him with money, trips and cars,” he said. “Mr. Williams’ alleged willingness to compromise his position of public trust in exchange for private financial gain is all the more unfortunate given that he was elected to protect the interests of the people of Philadelphia as their chief law enforcement officer.”

Many of the gifts detailed in the indictment have been the subject of news reports due to their inclusion in the amended gift disclosure filing that Williams filed last year. That filing led to an unprecedented $65,000 fine from the City’s Board of Ethics in January.

But while the Board of Ethics knew about such trinkets as the $45,000 roof that a Williams supporter put on the DA’s house, the trips to the resort in Punta Cana, Dominican Republic, a custom made sofa valued at $3,212 and the designer watches and handbags, the indictment unveils some newer gifts.

Because many of these transactions were conducted via text message, investigators had an extensive trail to follow, Fitzpatrick said. There are sections of the indictment giving details of those text messages.

As part of the indictment, Williams is being charged with wire fraud in relation to a joint account he held with his mother that was supposed to go to her care and now his personal needs. He is alleged to have put some of her Social Security money and $10,000 given to him by family friends on her behalf into his own accounts for personal needs that included paying his bills and tuition payments.

When contacted by the SUN for comment, Cameron Kline, spokesman for the District Attorney’s Office, asked that the privacy of the men and women working there be respected.

“This is not a reflection on the Philadelphia District Attorney’s Office and the men and women who work there,” he said. “This is about Seth Williams.”

Because he has not been convicted of a crime, Williams is under no obligation to resign from his $175,000 a year office.

No court date has been set for the case.