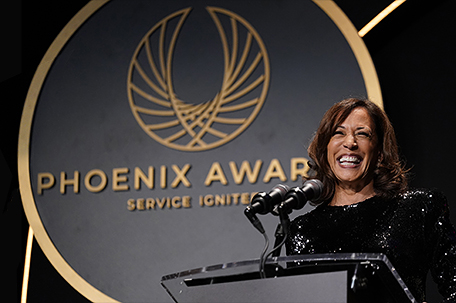 Annually, the CBCF recognizes extraordinary individuals who, through their efforts and achievements, have made significant contributions to their communities, culture, and the nation.

At the dinner, honorees received a prestigious, CBCF-commissioned Phoenix Award.

This year President Joe Biden and Vice President Kamala Harris were among many special guests. They both delivered remarks.

The Phoenix Awards Dinner is one of the largest gatherings bringing together Black political leaders, educators, diplomats and other influential individuals.

“This year’s conference theme, “Advancing Our Purpose and Elevating Our Power,” truly captures the spirit and the purpose of CBC, because that is what CBC does,” Harris said. “You will hear from the president about the progress we have made together. A president who chose CBC members and staff to serve at every level of our government, including our outstanding secretary of the Housing and Urban Development Agency, Madam Secretary Marcia Fudge.”

In his opening remarks, Biden thanked the members of the CBC. He went on to highlight some of the accomplishments of the Biden-Harris administration that are having a direct impact on the African American community, such as investments in HBCUs, the infrastructure law, the Inflation Reduction Act and student debt forgiveness.

“Jill and I are honored to be with so many friends,” Biden said.

Referencing the Buffalo shooting last summer, Biden declared, “Hate will not prevail in America. White supremacy will not have the last word.”

The Phoenix Awards Dinner also serves as an opportunity to honor the members of the Congressional Black Caucus for their service and ongoing efforts to eliminate the many disparities that continue to exist for millions of Black Americans in the United States.

CBC chairwoman U.S. Representative Joyce Beatty called all members of the CBC in attendance to the stage and also acknowledged those members who will be retiring from Congress.

The program’s hosts were Hollywood stars and actors Meagan Good and Omari Hardwick.

U.S. Speaker of the House, Nancy Pelosi was also in attendance and made remarks during the dinner. The ceremony closed with a dynamic performance from Gladys Knight.