The 50th Anniversary of Martin Luther King, Jr.’s “What Is Your Life’s Blueprint?” 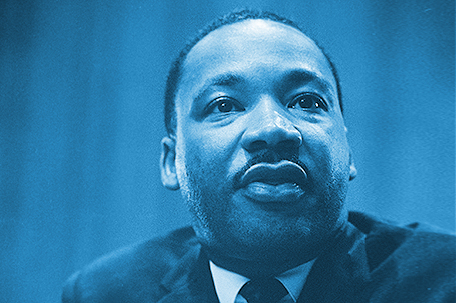 This article was originally published on October 26, 2017

Over 50 years ago, Martin Luther King, Jr. delivered his “What Is Your Life’s Blueprint?” speech to students at Barratt Junior High School in Philadelphia. In it, he lays out three important steps to follow in order for the students to reach their full potential, no matter their status life, and calls on them to actively commit to the struggle for freedom and justice. King’s words are inspirational for students of any age, of any era, especially now during our troubled times. In honor of the speech’s anniversary, we’re looking at the ways the empowering message of his speech resonates and guides us still today.

King emphasizes to the students how imperative it is for them to not be ashamed of themselves, to not be ashamed of being Black. Their lives have value. Nowhere else do we see the embodiment of King’s affirmation of Black worth and dignity today than the Black Lives Matter movement.

King zeroes in on the street sweeper, a recurring image in his others speeches, to make a crucial point: whatever one’s profession may be, strive to be the absolute best at it. Through dedication, one attains the invaluable reward of self-realization. The street sweeper serves as a source of inspiration that will carry King’s student audience (and all of us) through their lives. King continues his point about doing one’s best within one’s limits as he says:

We need not look further back than the events in Charlottesville, Virginia, to see that the history of intolerance and hate is not distant history. White supremacists and other bigots have felt emboldened by the current administration to take to the streets and act on their prejudice. By the time King delivered his speech, he had already spoken out about the atrocities of the Vietnam War. Active nonviolent resistance, of course, is the method he promoted to fight bigotry and injustice. He encouraged his student audience to commit to nonviolent protest to effect social change, and would advise us to do the same.

King gave us the steps to draft the blueprints for a future we’ll have to build, again and again, which each new generation, in order to strive for the just society that we want. This is a world we’re building together, and it won’t become a reality without collaboration, education, and rallying together for change. His words will always be timely, because the struggle for social justice is ongoing. With this blueprint, we can keep moving forward. As he states at the end of his speech, “We must keep going. If you can’t fly, run. If you can’t run, walk. If you can’t walk, crawl. But by all means, keep moving.”

As Walter Dean Myers said in his introduction to “A Time to Break Silence: The Essential Works of Martin Luther King, Jr., for Students,” in which this speech is reprinted:

“I believe that if Dr. King were alive today, he would enlist an army of young people to help each other and America in the education process. He would trust them to bring their energy and sense of justice to end gang violence and to reverse the feeling of helplessness that hurts so many of our young people. He would keep marching against unjust laws, racism, war, and poverty. Dr. King made America a better place for all people to live during the turbulent years of the civil rights struggle. Using his insights, his courage in tackling difficult problems, and his loyalty to nonviolence both in action and in the language we use with each other, perhaps we can continue building the America he once thought possible. What do you think?”

Watch the speech online at https://www.youtube.com/watch?time_continue=2&v=ZmtOGXreTOU and share it with the young people in your life. Talk with them about how King’s words make them feel. Ask them what their life’s blueprint is.