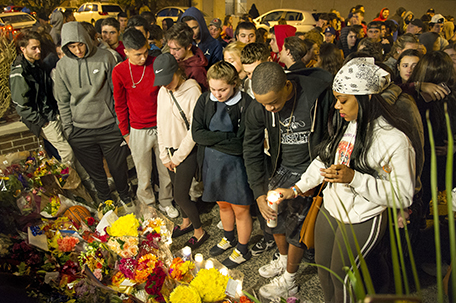 ABOVE PHOTO:  Friends and classmates place flowers and candles at a memorial before a vigil for Salvatore DiNubile in Philadelphia, Wednesday, Oct. 25, 2017. An argument between teenagers ended up with Caleer Miller and DiNubile, both 16, lying on the ground after taking shots in their chests on Tuesday. Police don’t know what the disagreement was about but they said the boys were pronounced dead shortly after 9 p.m. (Tom Gralish/The Philadelphia Inquirer via AP)

A teenager is in custody in the shooting deaths of two other youths earlier this week as police investigate shots fired at the home of the defendant’s family.

Brandon Olivieri, 16, turned himself last Friday night to face charges in the deaths of the other 16-year-olds, Caleer Miller and Salvatore DiNubile, who were shot Tuesday outside DiNubile’s home and about seven blocks south of Olivieri’s residence in South Philadelphia, police said. 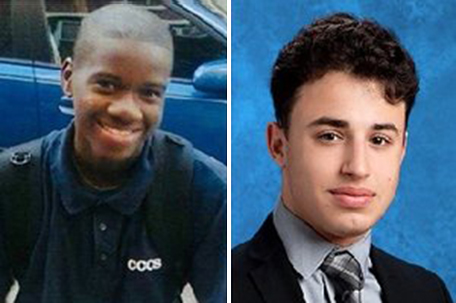 Homicide Capt. John Ryan said investigators believe there was a feud between two groups of teenagers, and the victims were believed to have been on opposite sides of the dispute. Police said more than a dozen shots hit the defendant’s home early Friday, but no one was injured.

Defense attorney James Lammendola said Olivieri’s parents were “scared out of their minds that their house was shot’’ and he also feared for their son’s safety. 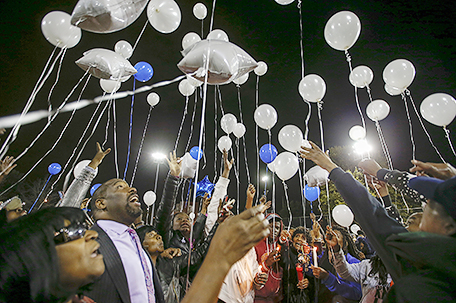 People release balloons after a vigil for Caleer Miller at the Chew Playground in Philadelphia, Thursday, Oct. 26, 2017. An argument between teenagers ended up with Miller and Salvatore DiNubile, both 16, lying on the ground after taking shots in their chests on Tuesday. (Yong Kim/The Philadelphia Inquirer via AP)

“The first thing I’m going to do when I get him is take him over to the Homicide Unit to talk,’’ Lammendola said before the defendant surrendered. “He’s a lot safer with the police than he is on the street.’’

Two Roman Catholic high schools were also locked down Friday as police said they followed up on leads in the case. The Archdiocese of Philadelphia said two Catholic schools in the city were on voluntary lockdown Friday “due to general threats against the school community on social media.’’

Candlelight vigils were held last week for both victims as those who knew them expressed shock and sadness. 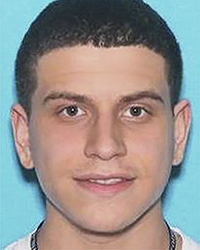 Fran Daly, principal of the Mastery Charter School, told the “Philadelphia Inquirer” that Miller had only been enrolled for 3 1/2 weeks but had already made an impression.

“He asked a lot of questions,’’ Daly said. “He was a real quiet kid. He had a good sense of humor, and he told us he was glad to join us.’’

Ghymin Lane, 16, said the two had Spanish class together and she helped him with classwork two days ago.