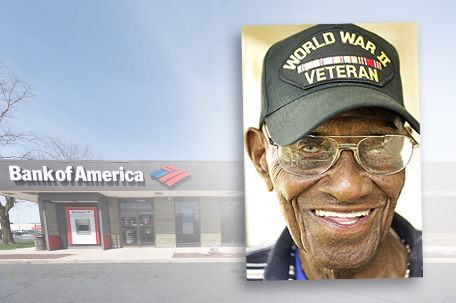 Someone is suspected of using Richard Overton’s personal information to drain his account.

The family of Richard Overton, the nation’s oldest veteran, got emotional after learning that the ex-soldier’s bank restored money stolen from his compromised account.

“Man, I teared up. I couldn’t believe it. They made it happen. The executive of the company said he’d take care of this, and he took care of it,” the World War II veteran’s third cousin Volma Overton told ‘The Dallas Morning News’, adding that the family was shocked when a Bank of America executive called to give them the good news.

A week earlier, the family of the Austin, Texas man, who was born in 1906, discovered that a large sum of money was drained from his account, USA Today reported. It appears that a thief accessed Richard Overton’s Social Security number and checking account number. The money was used to purchase savings bonds with Treasury Direct. There were several deductions from the account over the past year, according to Volma Overton, who noticed the debits on June 27.

Bank of America, the Austin Police Department and federal authorities are continuing their investigations. “Everyone wants to get to the bottom of this. I don’t think it’s going to be long before we know,” Volma Overton told the ‘Dallas Morning News’.

Money in Richard Overton’s GoFundMe account, which exceeded $444,000 on Sunday, was untouched in the theft. The family launched the fund-raising campaign in December 2016 to help pay for the 24-hour, in-home care that he needs.

Overton turned 112 on May 11. He served as a marksman in a racially segregated unit while stationed at Pearl Harbor and Okinawa, Japan. The former soldier continues his lifestyle, which includes smoking 12 cigars a day and drinking whiskey.