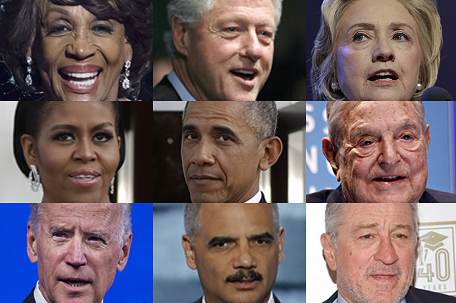 That’s what the police and federal law enforcement are calling a group of crude pipe bombs that were sent to a group of Democratic critics of President Donald Trump. Will their presence impact the Midterm elections?

Since Monday, 10 prominent critics of President Trump —- most of them Democratic leaders, donors or supporters —- have been sent the crude pipe bombs in envelopes with the address of Rep. Debbie Wasserman Schultz, former chair of the Democratic National Convention, as a return address. The device sent to former Attorney Gen. Eric Holder ended up at that address.

The list of bomb recipients also includes former President Barack Obama, Hillary Clinton, Rep. Maxine Waters, former CIA Chief John Brennan, and billionaire and Democratic donor George Soros. CNN’s New York studios had to be evacuated because they received Brennan’s package, according to the Associated Press. Brennan is a contributor to the network.

This particular group of presidential critics is notable because these are all people that the president has criticized at his numerous political rallies, said Keneshia Grant, an assistant professor of Political Science at Howard University.

With the midterm elections coming up in less than two weeks, and a political climate that might remind some of an episode of WWE Monday Night Raw, how will these unexploded devices figure in?

Like most things do these days, it’s going to depend on how Americans discuss it, especially the president, Grant said. For Democrats, the targeting of those they see as fellow travelers may get them to the polls as an act of defiance, Grant said.

“As you know, we make a lot of our political decisions based on emotion,” she said. “Democrats might be incensed and turn out in larger numbers. Some may be angry.”

Republicans might be angry as well, but for entirely different reasons. Since Trump is their standard bearer, they’ll most likely follow his lead.

Since he didn’t appear to stay on the high road he started on Wednesday at a press conference held at the White House, it’s anybody’s guess how Republican anger might manifest itself, Grant said.

“It depends on how the president continues to handle it,” she said. “[Wednesday] he started on the straight and narrow. But by the time he got to the rally in Wisconsin, he said a lot of things that he felt he had to say before saying that this was the media’s fault for this activity.”

At a news conference held at New York Police Department headquarters on Thursday, New York Mayor Bill DeBlasio was asked if he saw the events as a terrorist attacking.

His answer was definitive.

“This was absolutely a terrorist attack,” DeBlasio said. “The definition of terrorism is using violence to make a political impact. The whole game plan of terrorists is to intimidate us.”

For African-American voters, a group of people whose attempts to use the franchise and assert themselves politically have sometimes been met with terrorism, some of it in the form of explosives, defiance is definitely the mood. In a statement she issued about the two packages that were sent to her, Rep. Waters showcased that defiance.

“We have to keep doing what we’re doing to make this country right,” she said. “That’s what I intend to do and as the young people say, I ain’t scared.”

But for some, the concerns that they had when Obama was running for president and for most of the eight years that the Obama family spent in the White House — concerns about the family’s safety — still linger.

It’s not necessary to look that far back for safety concerns in this election cycle, Grant said. With two prominent gubernatorial races in states not known for hospitality for African=-Americans, some vigilance may be required.

“I’m a friend of [Florida Democratic Gubernatorial Candidate] Andrew Gillum,” she said. “He’s in a contentious race and the guy running against him is running a campaign featuring racist robo calls. I’m worried about his wife and his babies. I’m worried about Stacey Abrams. Is anyone looking out for her? I’m concerned about copy cats. The way our rhetoric is so hot right now, I can imagine this happening on the sub-national level.”

The FBI currently has possession of the package bombs and is currently investigating where they came from, and who may have sent them.

Ivanka Trump and Chelsea Clinton: Malia Obama should be ‘off limits’ to media