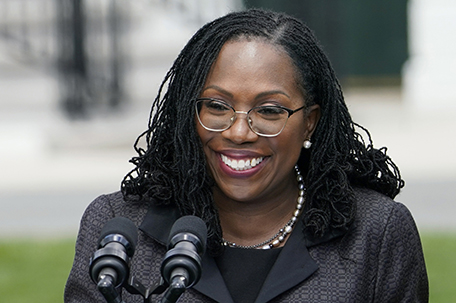 ABOVE PHOTO: Ketanji Brown Jackson speaks during an event on the South Lawn of the White House in Washington, April 8, 2022, celebrating the confirmation of Jackson as the first Black woman to reach the Supreme Court. The Supreme Court has taken a step that will allow new Justice Ketanji Brown Jackson, the first Black woman on the court, to take part in a case that could lead to the end of the use of race in college admissions.(AP Photo/Andrew Harnik)

WASHINGTON — The Supreme Court last Friday took a step that will allow new Justice Ketanji Brown Jackson, the first Black woman on the court, to take part in a case that could lead to the end of the use of race in college admissions.

Jackson, who joined the court June 30 following the retirement of Justice Stephen Breyer, had pledged during her confirmation hearing to sit out the case involving Harvard’s admissions policy because she was a member of the school’s board.

The Harvard dispute had been joined to a similar lawsuit involving the University of North Carolina. The court split the case in two, allowing Jackson to hear arguments and vote in the North Carolina case. Harvard is a private institution, while North Carolina is a public university.

Jackson’s participation seems unlikely to make much difference in the outcome on a court with a 6-3 conservative majority that is skeptical of the role of race in education, voting and other areas.

Arguments over one of the new term’s most highly anticipated issues probably will take place in November or December, but no date has been announced yet.

Jackson was a member of Harvard’s Board of Overseers from 2016 until the spring. It is made up of alumni and is one of Harvard’s two governing bodies. She is a graduate of both Harvard College and Harvard Law School.

Three other justices also got their law degrees from Harvard: Chief Justice John Roberts and Justices Elena Kagan and Neil Gorsuch. Roberts also was a Harvard undergraduate, and Kagan was the law school dean for a time. But none of the other justices has any current or recent role with the university.

Federal law requires all judges to recuse from cases in which their “impartiality might reasonably be questioned,” including close ties to a party, a financial interest in the outcome or participation at an earlier stage of the case.

The court has taken similar steps before. In 2020, Justice Sonia Sotomayor discovered a conflict in a dispute from two states over presidential electors. The court abandoned plans to hear them together and eventually issued its major decision in the case in which all the justices participated.