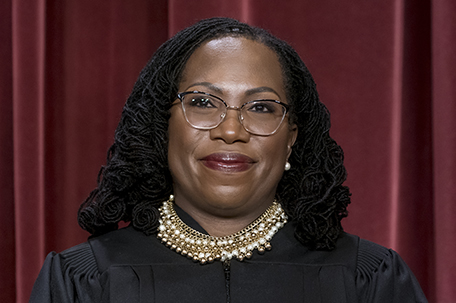 ABOVE PHOTO: Associate Justice Ketanji Brown Jackson stands as she and members of the Supreme Court pose for a new group portrait following her addition, at the Supreme Court building in Washington, Friday, Oct. 7, 2022. (AP Photo/J. Scott Applewhite)

WASHINGTON (AP) — A jury convicted Dayonta McClinton of robbing a CVS pharmacy but acquitted him of murder. A judge gave McClinton an extra 13 years in prison for the killing anyway.

In courtrooms across America, defendants get additional prison time for crimes that juries found they didn’t commit.

The Supreme Court is being asked, again, to put an end to the practice. It’s possible that the newest member of the court and a former federal public defender, Justice Ketanji Brown Jackson, could hold a pivotal vote.

McClinton’s case and three others just like it are scheduled to be discussed when the justices next meet in private on Jan. 6.

Sentencing a defendant for what’s called “acquitted conduct” has gone on for years, based on a Supreme Court decision from the late 1990s. And the justices have turned down numerous appeals asking them to declare that the Constitution forbids it.

The closest the court came to taking up the issue was in 2014, when Justices Antonin Scalia, Clarence Thomas and Ruth Bader Ginsburg provided three of the four votes necessary to hear an appeal.

“This has gone on long enough,” Scalia wrote in dissent from the court’s decision to reject an appeal from defendants who received longer prison terms for conspiring to distribute cocaine after jurors acquitted them of conspiracy charges.

Scalia and Ginsburg have since died, and Thomas remains on the court. But two other justices, Neil Gorsuch and Brett Kavanaugh, have voiced concerns while serving as appeals court judges. “Allowing judges to rely on acquitted or uncharged conduct to impose higher sentences than they otherwise would impose seems a dubious infringement of the rights to due process and to a jury trial,” Kavanaugh wrote in 2015.

Jackson, who also previously served on the U.S. Sentencing Commission, could provide a fourth vote to take up the issue, said Douglas Berman, an expert on sentencing at the Ohio State University law school.

“She is someone who we’d have good reason to believe would be troubled by the continued use of acquitted conduct,” said Berman, who filed a brief calling on the court to take up McClinton’s case.

McClinton, then 17, was part of an armed group that robbed a CVS pharmacy in Indianapolis in 2015 in search of prescription medicines, including opioids. The take was meager, about $68 worth of drugs, McClinton’s lawyers said in court papers. After one member of the group refused to share the proceeds, he was fatally shot in the back of the head at close range.

The reputed leader and other members of the group testified against McClinton at trial, as part of their bid for reduced prison terms, McClinton’s lawyers wrote.

Even with the testimony, jurors acquitted McClinton of the most serious charges against him. He should have faced six years in prison, at most.

Instead, the trial judge gave McClinton 19 years, finding that it was more likely than not that McClinton was responsible for the killing. The legal standard in a jury trial is higher, proof beyond a reasonable doubt.

Upholding McClinton’s prison term, Judge Ilana Rovner wrote for a unanimous three-judge panel of the Chicago-based 7th U.S. Circuit Court of Appeals that lower-court judges are bound by a 1997 Supreme Court ruling that “a jury’s verdict of acquittal does not prevent the sentencing court from considering conduct underlying the acquitted charge, so long as that conduct has been proved by a preponderance of the evidence.”

But Rovner noted that a growing number of federal judges “have questioned the fairness and constitutionality of allowing courts to factor acquitted conduct into sentencing calculations.”

Seventeen former federal judges also signed on to a brief in support of McClinton.

McClinton’s lawyers argue that the high court’s intervention is past due. “Unless this Court resolves this issue, tens of thousands of criminal defendants will continue to be sentenced using sentencing practices that are impossible to square with the Constitution,” they wrote.

The Justice Department urged the court to reject the appeal, as it did in many similar cases in the past.

There’s no certainty about what the justices will do. Berman, the sentencing expert, said there are reasons the court could take a pass again, including a preference for Congress to deal with the issue by legislation or for the Sentencing Commission to address it.

Neither has, over more than two decades, though the House in March passed legislation prohibiting punishment of acquitted conduct. The Senate has not taken any action.

Another reason for caution, Berman said, is that some justices might feel that they would craft at best a rough rule with the potential for unintended consequences that include restricting judicial discretion more than they want.

Jackson also might have to weigh whether this is a topic she wants to take on in her first term, already filled with consequential cases on race, elections and the latest dispute involving people with religious objections to same-sex marriage.

Supreme Court: Criminal juries must be unanimous to convict