Summer of protest: Chance for change, but obstacles exposed 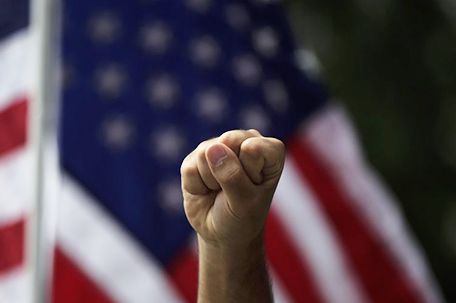 ABOVE PHOTO: A demonstrator raises his fist during a protest over the death of George Floyd, in Anaheim, Calif. The three month stretch between the symbolic kickoff and close of America’s summer has both galvanized broad public support for the racial justice movement and exposed the obstacles to turning that support into concrete political and policy changes. (AP Photo/Jae C. Hong, File)

WASHINGTON (AP) — Memorial Day brought the death of George Floyd at the hands of Minneapolis police, prompting hundreds of thousands of Americans to take to the streets in protest. President Donald Trump called Floyd’s death a “disgrace” and momentum built around policing reform.

But by Labor Day, the prospects for federal legislation evaporated. And Trump is seeking to leverage the violence that has erupted around some of the protests to scare white, suburban voters and encourage them to back his reelection campaign.

The three-month stretch between the symbolic kickoff and close of America’s summer has both galvanized broad public support for the racial justice movement and exposed the obstacles to turning that support into concrete political and policy changes. It has also clarified the choice for voters in the presidential race between Trump, who rarely mentions Floyd or other Black Americans killed by police anymore, and Democrat Joe Biden, who argues that the summer of protests can become a catalyst for tackling systemic racism.

Polls show Biden has an advantage among Americans when it comes to which candidate can manage the country better through the protests. An ABC News/Ipsos poll out Friday showed that 55% of Americans believe Trump is aggravating the situation. When it comes to reducing violence, Americans favor Biden to Trump, 59% to 39%.

“No matter what he says or what he claims, you are not safer in Donald Trump’s America,” Biden said Friday.

Yet Trump’s campaign also sees an opportunity to appeal to some voters who may be turned off by scenes of violence cropping up around some of the protests, including in Kenosha, Wisconsin, where police shot Jacob Blake, a Black man, seven times last month. The president has openly directed his appeals at the “suburban housewives of America” — especially white housewives — casting his reelection as the only thing preventing violence in cities from spilling into their neighborhoods.

Trump traveled to Kenosha this past week, thanked law enforcement for their efforts and met with people whose businesses were destroyed in fires. He did not meet with Blake’s family. Biden did, on Thursday, while on a visit to the city.

A Marquette University Law School poll that came out before the Aug. 23 shooting showed that support for the protests had slipped from 61% in June to 48% in August among voters in Wisconsin, one of the most crucial states in the November election. Among white Wisconsinites, approval of the protests dipped from 59% in June to 45% in August. Approval increased slightly for Black voters, to 78% from 77%. While approval fell among members of both parties, the dip was larger among Republicans.

“I think that there was a lot of optimism surrounding the protests this summer in the wake of George Floyd because for the first time, we were starting to see all of these white people in the United States pay a great deal of attention to police brutality and racial injustice,” said Ashley Jardina, assistant professor of political science at Duke University, and author of the book “White Identity Politics.”

“But white Americans have always had a low tolerance for protests and unrest around race in the U.S., and that’s particularly true when they think that protests become violent or involve the destruction of property,” Jardina added.

The majority of racial justice protests have been peaceful. But some, including in Kenosha and Minneapolis, saw vandalism and violence. Federal officials have arrested more than 300 people since the demonstrations began. A Trump supporter is charged with homicide in the shooting death of two protesters, and an anti-fascist shot and killed a right-wing protester in Portland, Oregon, and was later killed during his arrest by law enforcement.

Trump has also tried to link the protests to local increases in shootings, murders and other crimes in cities, including Kansas City, Missouri, Detroit, Chicago and New York, even though criminal justice experts say the spike defies easy explanation in a year when with historic unemployment and a pandemic that has killed more than 180,000 people. Crime overall remains lower than it has been in years past and criminologists also caution against a focus on crime statistics over a short time frame, such as week-to-week or month-to-month.

Dan Cooper, a white 51-year-old software engineer in Portland, remains supportive of the protests and the Black Lives Matter movement but fears the vandalism is “playing into the right’s hands.”

“It makes Portland look bad and it makes it easy for the right to portray the city as being fundamentally lawless when in reality it’s this tiny area downtown that’s mostly peaceful otherwise,” he said.

“A few months ago they started off in a more BLM-focused way. It does seem like they’ve lost their way a little bit,” Cooper said of the protests.

Steve DeFeo, a white 49-year-old manager at an insurance company in Edgewater, Florida, shares that concern. He said that while he supports the protests and the Black Lives Matter movement, he worries that violent protesters allow others to inaccurately portray the movement as dangerous.

“That message gets amplified when you go out and spray-paint and throw rocks and light fires,” he said. “When you see a burnt building, that is helping the wrong side of the narrative. It’s not as effective for the BLM movement and keeping their message for what it should be.”

Black Lives Matter leaders have never asked for, encouraged or condoned looting or fighting with law enforcement or police supporters on the streets, because they are protesting the violent harm done to their communities.

Thenjiwe McHarris, a strategist with the Movement for Black Lives, a coalition of more than 150 organizations, said Trump’s effort was a “desperate tactic to paint our movement a particular kind of way to stoke fear in communities across the country and to try to steal this election.”

“What does it mean for the president of the United States to call the movement violent and dangerous and chaotic? It means that he’s putting a target and a bull’s-eye on thousands and thousands, perhaps even hundreds of thousands, if not millions of people, who are courageous and bold enough to say that Black Lives Matter.”

Leaders say the movement isn’t losing steam and the coalition has only begun to move toward its next phase of advocacy and grassroots work, and the majority of people support it “because they understand that what’s happening to Black people is such a grave injustice,” McHarris said.

Federal police reform stalled on Capitol Hill after an initial burst of movement. Nationwide, since late May, there have been at least 450 pieces of policing reform proposals introduced in 31 states, according to a count by the National Conference of State Legislatures. Many states had finished their normal legislative session at the time of Floyd’s death and are planning to address police accountability next year.

Meanwhile, some within the movement have grown frustrated with what they see as outsize attention on the violence — even those accused of endorsing that violence.

“You think people want to go out and destroy property? Absolutely not,” said Hawk Newsome, a New York activist whose comments about protest violence on Fox News prompted a tweet from Trump. “This is a last resort. People just got so frustrated at a lack of progress, lack of clarity, lack of transparency, lack of truth.”

Newsome said the way to keep the movement going forward is to educate people about white supremacy and systemic racism and how both are knit into the fabric of America and must be unraveled in order to progress. But that’s not easy to talk about in a sound bite, and Newsome blames both Democrats and Republicans for a lack of nuance and accountability.

Breanna Wright, 24, of Louisville participated in more than 20 demonstrations in her hometown, where Breonna Taylor, a Black woman, was killed by police in March. Wright says she remains focused on turning the protests into action.

“I mean, it’s cute, you’ve tried — thank you! It’s touching that you’ve done that! — but the system has to change.”