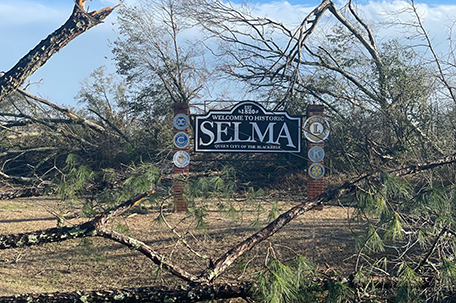 ABOVE PHOTO: Fallen trees are seen in the aftermath of severe weather, Thursday, Jan. 12, 2023, in Selma, Ala. A large tornado damaged homes and uprooted trees in Alabama on Thursday as a powerful storm system pushed through the South. (AP Photo/Butch Dill)

Zakiya Sankara-Jabar’s cellphone buzzed relentlessly as a deadly storm system that spawned tornadoes throughout the U.S. South laid waste to relatives’ homes and churches across a part of Alabama known as the Black Belt.

Text messages and calls from loved ones, many of them hysterical, provided her with devastating updates of last Thursday’s storms, which tore through her native Dallas County, including the history-steeped streets of Selma.

Family in the city synonymous with the civil rights movement saw their homes damaged, but they remained structurally sound. For those in Beloit, a nearby unincorporated town where Sankara-Jabar spent the first 20 years of her life, the damage was almost unfathomable.

“I have family who lost everything,” she said last Friday. “My great-aunt’s house was leveled. I saw pictures and it’s like the house was never even there.”

Sankara-Jabar’s family has called this part of Alabama home for generations. Taking its name from the rich, dark soil, the Black Belt is a region all too familiar with hardship, both economic and social. Many of the civil rights movement’s most important struggles took place in the area, including “Bloody Sunday,” when nearly 58 years ago state troopers and deputized klansmen viciously attacked Black people marching nonviolently for voting rights across Selma’s Edmund Pettus Bridge.

Nearly every year since the march, Selma and Dallas County have welcomed back hundreds to thousands of movement foot soldiers, tourists, politicians and activists who ceremonially cross the Pettus Bridge to commemorate the sacrifices of those who bled for democracy. But when the annual celebration is over, the Black Belt continues on as a working class region struggling to deal with gun violence and drug addiction, much like many U.S. communities, but with far fewer resources.

Dallas County, which includes Selma, is home to about 37,600 people, roughly 71% of them Black and 27% white. The county’s median household income is $35,000 and nearly one out of every three residents lives in poverty.

“Losing everything for somebody who was already working class and already poor financially is devastating.” said Sankara-Jabar, a racial justice activist who now lives just outside of Washington, D.C.

Last Thursday’s storm inflicted heavy damage on Selma, cutting a wide path through the downtown area, where brick buildings collapsed, oak trees were uprooted, cars were tossed onto their sides and power lines were left dangling. While Selma officials said no fatalities had been reported there, several people were seriously injured.

U.S. Rep. Terri Sewell, a native of Selma, said it was painful to see what the tornado had done to her beloved hometown.

At the same time, she said, Selma is resilient.

“After all, we survived and thrived through civil rights and voting rights,” she said.

The city is famed for its historic sites: Pettus Bridge, where the Selma-to-Montgomery march is commemorated; Brown Chapel AME Church, where the Rev. Martin Luther King Jr. and the Southern Christian Leadership Conference worked with local activists during the Selma movement; and the National Voting Rights Museum and Institute, founded in 1991 and opened near the bridge.

“We ask that people keep Selma in their hearts right now, because it is the communities of color that have suffered the most in this particular storm,” said Felecia Pettway, a member of the voting rights museum’s board of directors. “We are really concerned about what happens next.”

Pettway is also a development director for Legal Services Alabama, an organization that provides free civil legal advocacy for low-income residents. The organization’s Selma office was damaged in the tornado.

A few blocks away from Brown Chapel AME Church, the starting point of the 1965 marches from Selma to Montgomery, homeowners boarded up blown-out windows and carried out salvageable belongings from homes with their roofs blown off.

Rachel Bonner, 77, was at home when the tornado struck, ripping the roof and sides away from her home.

Like many people over age 60 in this city, her life is intertwined with the region’s history. She graduated from a historic school for Black students that stayed open as a public school until the 1970s.

“I marched in Selma and Wilcox County during the movement,” Bonner said.

Pearlie Miller, who was at work during the storm, made her way home to check on her sisters. Her home was destroyed, but she is thankful her family is safe.

“God has been good to us. We’ve been blessed. That is how we are looking at it,” she said. “Our entire family is safe. Our neighbors are safe and that’s all that matters.”

It is not hyperbole to consider Selma’s downtown district hallowed ground. It’s the place from which the late Amelia Boynton Robinson, a Selma voting rights strategist and civil rights movement matriarch, convinced King to get involved in the movement, hoping he would help nationalize the voting rights struggle. It’s where the late Georgia congressman and voting rights icon John Lewis was beaten nearly to death by state troopers as he crossed the Pettus Bridge on March 7, 1965.

When the expected tens of thousands gather there this coming March for the annual Selma Bridge Crossing Jubilee, the downtown will resemble a huge street festival. There will be music blaring and vendors selling food, T-shirts and other memorabilia.

But when the national political figures leave and the news media cameras disappear, Selma’s high crime levels, pothole-covered streets, abandoned homes and vacant businesses will remain. The city famous for the voting rights struggle will still have to address its sagging voter turnout.

Adia Winfrey, executive director of Transform Alabama, a nonprofit that promotes civic engagement and voter participation, said the needs of the entire Black Belt in Alabama, not just Selma, are manifold and include water, sewage and educational infrastructure as well as child care, parental support and activities for young people.

“There are great people doing great work, but their capacity is limited,” said Winfrey, who is also board secretary for the Selma Bridge Crossing Jubilee.

“How do we leverage the excitement about the jubilee and interest in the history of Selma, to bring the resources to Selma?”