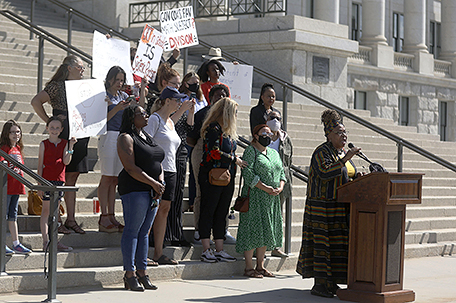 ABOVE PHOTO: Betty Sawyer joins educators and community activists in protesting Utah lawmakers’ plans to pass resolutions encouraging a ban of critical race theory concepts outside of the Capitol in Salt Lake City as both supporters and counter protesters stand behind her. (Kristin Murphy/The Deseret News via AP)

RALEIGH, N.C. — Teachers and professors in Idaho will be prevented from “indoctrinating” students on race. Oklahoma teachers will be prohibited from saying certain people are inherently racist or oppressive, whether consciously or unconsciously. Tennessee schools will risk losing state aid if their lessons include particular concepts about race and racism.

Governors and legislatures in Republican-controlled states across the country are moving to define what race-related ideas can be taught in public schools and colleges, a reaction to the nation’s racial reckoning after last year’s police killing of George Floyd. The measures have been signed into law in at least three states and are being considered in many more.

Educators and education groups are concerned that the proposals will have a chilling effect in the classroom and that students could be given a whitewashed version of the nation’s history. Teachers are also worried about possible repercussions if a student or parent complains.

“Once we remove the option of teachers incorporating all parts of history, we’re basically silencing the voices of those who already feel oppressed,” said Lakeisha Patterson, a third-grade English and social studies teacher who lives in Houston and worries about a bill under consideration in Texas.

At least 16 states are considering or have signed into law bills that would limit the teaching of certain ideas linked to “critical race theory,” which seeks to reframe the narrative of American history. Its proponents argue that federal law has preserved the unequal treatment of people on the basis of race and that the country was founded on the theft of land and labor.

The latest state to implement a law is Tennessee, where the governor this past week signed a bill to ban the teaching of critical race theory in schools.

The legislative debate over that bill caused a stir earlier this month when a Republican lawmaker who  supports it, state Rep. Justin Lafferty, wrongly declared that the Constitution’s original provision designating a slave as three-fifths of a person was adopted for “the purpose of ending slavery.”