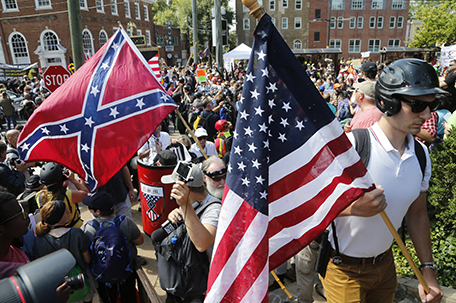 ABOVE PHOTO: White nationalist demonstrators walk into Lee park surrounded by counter demonstrators in Charlottesville, Va., Saturday, Aug. 12, 2017. In its annual report, released Wednesday, March 9, 2022, the Southern Poverty Law Center said it identified 733 active hate groups in 2021, down from the 838 counted in 2020 and the 940 counted in 2019. Hate groups had risen to a historic high of 1,021 in 2018, said the law center, which tracks racism, xenophobia and far right militias.(AP Photo/Steve Helber, File)

The number of white nationalist, neo-Nazi and anti-government extremist groups across the U.S. fell for a third straight year in 2021, even as some groups were reinvigorated by the Jan. 6 attack on the U.S. Capitol last year and by the ongoing culture wars over the pandemic and school curriculums.

In its annual report, released last Wednesday, the Southern Poverty Law Center said it identified 733 active hate groups in 2021, down from the 838 counted in 2020 and the 940 counted in 2019. Hate groups had risen to a historic high of 1,021 in 2018, said the law center, which tracks racism, xenophobia, and far right militias.

“Rather than demonstrating a decline in the power of the far right, the dropping numbers of organized hate and anti-government groups suggest that the extremist ideas that mobilize them now operate more openly in the political mainstream,” says the new report, shared with The Associated Press ahead of its release.

The Montgomery, Alabama-based law center cited several examples including Fox News’ Tucker Carlson, whose discussion of a conspiracy likening immigration from nonwhite countries to a “great replacement” of white Americans last September was welcomed by white nationalists who were linked to the “Stop the Steal” rally that preceded the Jan. 6 Capitol attack. The law center counted 98 active white nationalist groups in 2021.

The report’s release comes one day after a federal jury convicted a Texas man of storming the Capitol with a holstered handgun, in an attempt to obstruct Congress’ joint session to certify the Electoral College vote that cemented President Joe Biden’s victory over former President Donald Trump. Separately on Tuesday, Henry “Enrique” Tarrio, a longtime leader of the far-right Proud Boys extremist group, was arrested on a conspiracy charge related to his alleged role in coordinating the Capitol attack.

Active Proud Boys chapters jumped to 72 in 2021, up from 43 in 2020. The rise in chapters was noteworthy considering that more than three dozen members of the group had been charged in relation to their role in the Capitol attack, according to the law center.

“After Jan. 6, in the immediate aftermath, these groups did lay low,” Susan Corke, SPLC’s Intelligence Project director, told the AP. “I had a moment of hope that was quickly extinguished when I didn’t see more mainstream Republicans condemn these groups.”

Beyond the Capitol attack, the law center’s report details how several factions of the far-right movement have been reinvigorated by political wedge issues. Issues fueling active hate and anti-government extremist groups include the banning of critical race theory and books that discuss LGBTQ identity in public schools, coronavirus vaccine and mask mandates, and immigration.

“This movement is working feverishly to undermine democracy, but what’s more startling is that they are also coalescing around a willingness to engage in violence,” Corke said.

Slowing any push toward authoritarianism, according to the SPLC, requires elected leaders to universally embrace democratic institutions, while also protecting the right to vote for communities of color and other marginalized people. The law center has also called for better funding of prevention programs that interrupt the radicalization of young people by hate and anti-government groups.

The SPLC is a liberal advocacy organization that, in addition to monitoring hate groups, files lawsuits over justice issues and offers educational programs to counter prejudice. Frequently criticized by conservative groups as biased, the nonprofit group has faced lawsuits in the past over its designation of various organizations as hate groups.

White militia: “Patriot” groups, surge in number in past year