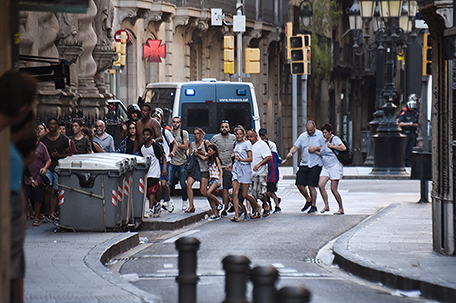 ABOVE PHOTO:  People flee from the scene after a white van jumped the sidewalk in the historic Las Ramblas district of Barcelona, Spain, crashing into a summer crowd of residents and tourists Thursday, Aug. 17, 2017. According to witnesses the white van swerved from side to side as it plowed into tourists and residents. (AP Photo/Giannis Papanikos)

By Joseph Wilson and Lori Hinnany

BARCELONA, Spain — Police put up scores of roadblocks across northeast Spain on Sunday in hopes of capturing a fugitive suspect from the 12-member Islamic extremist cell that staged two vehicle attacks and plotted much deadlier carnage using explosives favored by Islamic State militants.

Complicating the manhunt, though, was the fact that police have so far been unable to identify with absolute certainty who exactly is at large.

While police have names for the 12 members of the cell, three people technically remain unaccounted for: two believed killed when the house where the plot was being hatched exploded Wednesday, and a suspected fugitive, Catalan police official Josep Lluis Trapero told reporters Sunday.

Trapero declined to confirm that Younes Abouyaaquoub, a 22-year-old Moroccan, was the suspected fugitive who allegedly drove the van that plowed down Barcelona’s Las Ramblas promenade Thursday, killing 13 people and injuring 120. Another attack killed one person and injured others hours later in the seaside town of Cambrils.

“We are working in that line,” Trapero said. But he added: “We don’t know where he is.”

Another police official did confirm that three vans tied to the investigation were rented with Abouyaaquoub’s credit card: The one used in the Las Ramblas carnage, another found in the northeastern town of Ripoll, where all the main attack suspects lived, and a third found in Vic, on the road between the two.

Police believe the cell members had planned to fill the vans with explosives and create a massive attack in Barcelona, the Catalan capital. Trapero confirmed that more than 100 tanks of butane gas were found at the Alcanar house that exploded, as well as ingredients for making the explosive TATP, which was used by the Islamic State group in attacks in Paris and Brussels.

“Our thesis is that the group had planned one or more attacks with explosives in the city of Barcelona,” he said. A more deadly plot was foiled, however, when the house in Alcanar blew up Wednesday night.

The investigation was also focused on a missing imam, Abdelbaki Es Satty, who police think might have died in the Alcanar explosion. Trapero confirmed the imam was part of the investigation but said police had no solid evidence he was responsible for radicalizing the young men in the cell.

In June, Es Satty abruptly quit working at a mosque in Ripoll and has not been seen since.

His former mosque denounced the deadly attacks and weeping relatives of the suspects marched into a Ripoll square on Saturday, tearfully denying knowledge of the radical plans of their sons and brothers.

Abouyaaquoub’s mother said his younger brother Hussein has also disappeared, as has the younger brother of one of five suspects wearing fake explosives belts who were shot dead by police during the Cambrils attack early Friday.

Everyone so far known in the cell grew up in Ripoll, a town in the Catalan foothills 62 miles north of Barcelona. Spanish police searched nine homes in Ripoll, including Es Satty’s, and set up roadblocks. French police carried out extra border checks on people coming in from Spain.

Neighbors, family members and the mayor of Ripoll said they were shocked by news of young men’s alleged involvement in an extremist cell. All were described as well-integrated speakers of both Spanish and Catalan, the regional language.

Halima Hychami, the mother of Mohamed Hychami, an attacker believed to have been killed by police, said he told her he was leaving on vacation and would return in about a week. His younger brother, Omar, left mid-afternoon Thursday and has not been heard from since.

“We found out by watching TV, same as all of you. They never talked about the imam. They were normal boys. They took care of me, booked my flight when I went on vacation. They all had jobs. They didn’t steal. Never had a problem with me or anybody else. I can’t understand it,” she said.

“I’m still waiting for all of it to be a lie. I don’t know if they were brainwashed or they gave them some type of medication or what. I can’t explain it,” she said.

Islamic extremists have made a point of targeting Europe’s major tourist attractions, often with rented or hijacked vehicles. But in the last two years, the extremist group has steadily lost ground in its self-declared caliphate in Iraq and Syria.

On Sunday, King Felipe VI, Queen Letizia, Spanish Prime Minister Mariano Rajoy and other officials attended a solemn Mass at Barcelona’s Sagrada Familia basilica for the victims of the attacks, who ranged in age from 3 to 80.

The archbishop of Barcelona, Cardinal Joan Josep Omella, said the presence of so many people was a “beautiful mosaic” of unity and urged all to work toward a common objective of “peace, respect, fraternal coexistence and love.”

Spanish authorities on Sunday confirmed that one of the 14 dead was 7-year-old Julian Cadman, an Australian with dual British nationality, who became separated from his injured mother.

Trapero indicated Sunday there might be a 15th victim: a man whose body was found in a car that charged through a police checkpoint after the Barcelona attacks. Police fired on the vehicle and initially thought they had killed the person found inside. A forensics examination revealed no sign of bullet wounds, Trapero said.

He said another man was seen running from the scene outside the city, suggesting a possible carjacking, but investigators have not established a link between the checkpoint incident and the terror investigation.

Vancouver police also said Sunday that 53-year-old Canadian Ian Moore Wilson was among those killed in Barcelona and his wife Valerie was wounded.

Fiona Wilson, his daughter, described her father as an adventurous traveler and thanked those who helped him and her mother in his final moments.

“In the midst of this tragedy, my dad would want those around him to focus on the extraordinary acts of human kindness that our family has experienced over the past several days, and that is exactly what we intend to do,” she said.

Francisco Lopez Rodriguez, a 57-year-old Spaniard, was killed with his 3-year-old grand-nephew, Javier Martinez, while walking along the Las Ramblas promenade. His widow Roser is recovering in a hospital.

“We are a broken family,” niece Raquel Baron Lopez posted on Twitter.

Other victims included a grandmother, 74, and her granddaughter, 20, from Portugal who were visiting Barcelona to celebrate a birthday; an Italian father who saved his children’s lives but lost his own; an American man who was celebrating his first wedding anniversary.

The Catalan regional government said 51 attack victims were still hospitalized Sunday, 10 of them in critical condition.