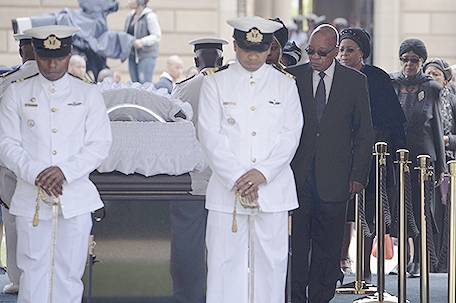 JOHANNESBURG — At Nelson Mandela’s memorial, the crowd applauded dignitaries and even cheered the last apartheid-era president. But spectators booed South African leader Jacob Zuma, embarrassing him on an international stage and reflecting challenges that the ruling party, once led by Mandela, faces ahead of elections next year.

“Can we please be disciplined?” a vexed Cyril Ramaphosa, deputy leader of the ruling African National Congress, said Tuesday to the stadium crowd after jeers erupted when a giant video screen showed Zuma, seated among heads of state paying tribute to Mandela. The anti-apartheid leader died Dec. 5.

Corruption scandals have stained Zuma and the ANC, the liberation movement during apartheid that casts itself as the standard-bearer of Mandela’s legacy of reconciliation and inclusiveness. Crime, economic inequality and other social challenges have added to public discontent, two decades after the end of apartheid.

Simon Maphosa, a 45-year-old multimedia designer, said people were booing because they felt the ANC had failed to rein in their man.

“They are trying to say to the party, ‘You have to control this guy,’” Maphosa said.

In the days before Mandela’s death, South African media were filled with reports on the alleged use of more than $23 million in taxpayer money for construction at Zuma’s family compound.

Earlier this year, a chartered plane carrying about 200 guests from India to a lavish family wedding was allowed to land at a South African air force base in violation of security protocols. Zuma has connections to the family.

Prof. David Glaser, head of political studies at the University of the Witwatersrand in Johannesburg, said the booing partly reflects discontent within the ANC over its leadership. As ANC leader, Zuma is likely to be the party’s candidate for the presidency.

Glaser also said there is more opposition to Zuma in the populous Gauteng province, which includes the major cities of Johannesburg and Pretoria. A new tolling system on area highways has deepened discontent.

The South African Press Association reported that when Zuma arrived for the Mandela memorial, some people made a rolling hand signal, usually a gesture that political change is wanted. Opposition parties are not expected to dislodge the ANC at the next elections, but they could increase their vote share.

Officials at the Mandela memorial tried to head off the booing, switching off the video screen after crowds jeered whenever Zuma’s face appeared there. There were whistles as he reached the podium to give his keynote speech, and a choir launched into a song, possibly to drown out the heckling.

In contrast, the crowd warmly welcomed F.W. de Klerk, South Africa’s last white president who released Mandela from jail after 27 years and negotiated the white minority out of power; former President Thabo Mbeki, a former rival of Zuma within the ruling party; and Nkosazana Dlamini-Zuma, a former wife of Zuma who heads the African Union Commission.

U.S. President Barack Obama got the most enthusiastic reception. President Robert Mugabe of Zimbabwe got cheers, too.

Zuma, an anti-apartheid activist, was imprisoned for a decade on Robben Island, the same prison where Mandela was held.

He had legal problems over corruption allegations while serving in government before he became president. He was also acquitted of rape charges in 2006.