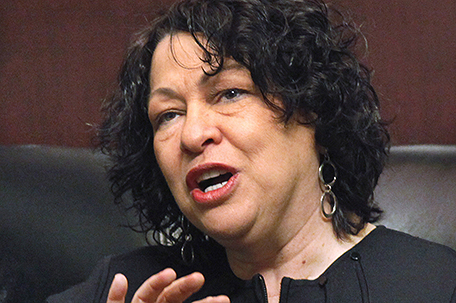 WASHINGTON — Supreme Court Justice Sonia Sotomayor rejected on Sunday the notion that alternatives to affirmative action such as income or residency could achieve similar results in diversifying the nation’s colleges and universities.

When asked whether other “less fractious” measures could achieve similar results for schools, she said that statistics show the alternatives simply don’t work.

Sotomayor strongly backs affirmative action and wrote the dissent in April in a 6-2 decision that upheld a state’s right to outlaw the use of race in determining admissions.

Sotomayor is the first Hispanic on the Supreme Court and graduated from Princeton University. She said her alma mater could fill its freshman class with students who scored perfectly on undergraduate metrics, but it chooses not to do so because it would not create a diverse class based on standards the school considers important for success in life.

She also pointed out that some students boost their prospects for attending a school based on their family’s history.

“Look, we have legacy admissions. If your parents or your grandparents have been to that school, they’re going to give you an advantage in getting into the school again,” Sotomayor said. “Legacy admission is a wonderful thing because it means even if you’re not as qualified as others you’re going to get that slight advantage.”

Sotomayor participated in the rare television interview on ABC’s “This Week” as she promotes the paperback edition of her book, “My Beloved World.”