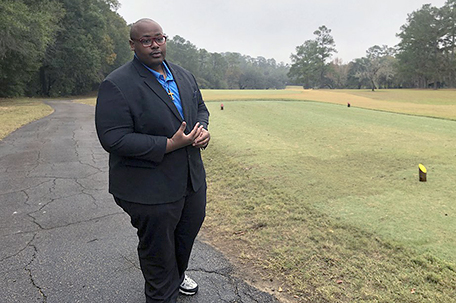 ABOVE PHOTO: Delaitre Hollinger, the immediate past president of the Tallahassee branch of the NAACP, visits the Capital City Country Club in Tallahassee, Fla., on Dec. 17, 2019.  (AP Photo/Bobby Caina Calvan)

TALLAHASSEE, Fla. — The rumors swirled for decades: A dark history long lay buried under the grassy knolls and manicured lawns of a country club in Florida’s capital city.

Over the years, neat rows of rectangular depressions along the 7th fairway deepened in the grass, outlining what would be confirmed this month as sunken graves of the slaves who lived and died on a plantation that once sprawled with cotton near the Florida Capitol.

The discovery of 40 graves — with perhaps dozens more yet to be found — has spawned discussion about how to honor those who lie in rest at the golf course. And it has brought renewed attention to the many thousands of unmarked and forgotten slave cemeteries across the Deep South that forever could be lost to development or indifference.

“When I stand here on a cemetery for slaves, it makes me thoughtful and pensive,” said Delaitre Hollinger, the immediate past president of the Tallahassee branch of the NAACP. His ancestors worked the fields of Leon County as slaves.

Wooden markers that had identified the graves have long since decayed. For years, golfers have unknowingly trod through the cemetery.

Leon County was the center of Florida’s plantation economy during the antebellum days and had the state’s highest concentration of slaves. Just before the Civil War, three of every four county inhabitants were human chattel owned by elite white families.

The Houstouns of Tallahassee was one such family. From the early 1800s through the Civil War, the family operated a 500-acre plantation. In modern times it has been parceled out to developers who transformed fields into an expanse of strip malls and residential neighborhoods, some sprouting stately homes.

A huge swath of the property became the Capital City Country Club, now an 18-hole golf course in one of Tallahassee’s most sought-after communities.

“It’s fair to say that the golf course is one of the reasons why this burial ground has been preserved as well as it has for so long,” said Jay Revell, the country club’s resident historian and the vice president of the region’s chamber of commerce.

“A hundred years ago when the golf course was constructed there was certainly no technology to decipher what was or wasn’t here,” he said during a recent visit to the country club.

There had long been talk among some Tallahassee old-timers about the long-gone plantation and its cemetery.

The stories piqued Hollinger’s curiosity. He dug into newspaper archives, where he found clippings dating back to the 1970s that mentioned the burial site.

He contacted city officials for help, who in turn reached out to experts, including the National Park Service.

That’s when Jeffrey Shanks, a park service archaeologist, took up the cause.

Earlier this month, after weeks of scanning 7,000 square meters of the golf course using ground-penetrating radar and two cadaver-sniffing dogs, Shanks issued his preliminary conclusion: The subsurface anomalies at the country club are indeed graves.

Shanks called the discovery a significant historical find because so many slave cemeteries are unaccounted for.

“It’s a really serious problem,” Shanks said. “It’s not just a Florida problem. It’s really a problem across the Southeast.”

It’s hardly a new issue. A Florida state task force two decades ago estimated that there could be as many as 1,500 unmarked and abandoned slave or African American cemeteries across the state. Some Florida lawmakers want to establish a new task force to address the matter.

“We want to identify covered-up graves that have been built upon, or destroyed, or obliterated from history,” said state Sen. Darryl Rouson, whose district lies in the Tampa Bay area. “Once identified, we’d like to do some type of memorial for those souls.”

Nationally, there have been discussions about establishing an African American Burial Grounds Network. Work is also underway on a national database to record the burial sites for enslaved Americans.

As property, slaves weren’t accorded dignity in life nor in death, said Jonathan Lammers, a historian who drafted a report on the Houstoun property.

“They were nameless on census records, and they are nameless and unremembered in death,” he said.

In Leon County, there are only a handful of known slave burial sites — despite the scores of plantations that once existed in the area. Each would have had a cemetery for its enslaved.

“It’s safe to say that there are thousands upon thousands of these graves in Leon County,” Lammers said, “and hundreds and hundreds of thousands, if not millions, across the Southeast that remain unknown today.”

At the Capital City Country Club, there are no plans to exhume or disturb any of the rediscovered remains. But how the site will be memorialized is still up for discussion.

Hollinger, for one, wants to reroute golf carts and fence off the area so golfers won’t tread over the graves. He also proposes a small memorial that will recount, he said, the unvarnished history of the property — including how it profited from the labor of slaves.

He doesn’t want the history of these graves “to be prettied up” or romanticized. “I want us to be accurate and truthful in the story we tell.”