Skulkin says he has ‘comfort’ with potential successor at VA 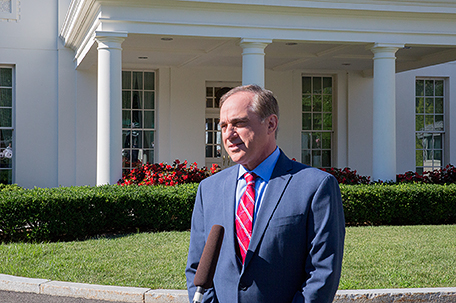 WASHINGTON — Former Veterans Affairs Secretary David Shulkin downplayed concerns about his potential successor’s lack of managerial experience Monday, saying the key for improving the VA will be surrounding White House doctor Ronny Jackson with a good team “because no one person can do this alone.”

Shulkin and the White House have engaged in a highly public campaign surrounding his departure from the VA last week. Shulkin said he was fired. The White House said he resigned.

On Monday, Shulkin told CNN there was no reason he would resign. He said he had been given a heads-up on his ouster by Chief of Staff John Kelly moments before President Donald Trump tweeted it.

Shulkin said he supports the person President Donald Trump selected to replace him.

“I have comfort because I know Dr. Jackson,” Shulkin said. “Dr. Jackson is a very honorable man who wants to do the right thing.”

Shulkin’s comments represented a different tone from the fractious back-and-forth Sunday when the White House hit back at Shulkin for claiming that he was fired from his job and that he was only informed about it shortly before President Donald Trump tweeted about his replacement.

The Trump administration says he left his job willingly amid a bruising ethics scandal and mounting rebellion within the agency.

On Sunday, chagrined by Shulkin’s public statements blaming his ouster on unfair “political forces” in the Trump administration, the White House circulated a “talking points” memo to some veterans groups in a bid to discredit him.

The three-page memo, obtained by The Associated Press, points out seven “lies” that it said Shulkin had spread. They include statements in which he minimizes a VA watchdog report in February that concluded he violated ethics rules by accepting free Wimbledon tennis tickets. The VA inspector general has previously found Shulkin made misleading statements about the trip to investigators and the news media.

In television interviews earlier Sunday, Shulkin said he had not submitted a resignation letter, or planned to, and was only told of Trump’s decision to replace him shortly before the Twitter announcement. He said he had spoken to Trump by phone earlier that day about VA improvements, with no mention of his job status, and was scheduled to meet with the president the next morning.

Under federal law, a president has wide authority to temporarily fill a federal agency job if someone “dies, resigns, or is otherwise unable to perform the functions and duties of the office.” There is no mention of a president having that authority if the person is fired. Still, it’s unclear if courts would seek to draw a legal distinction between a firing and a forced resignation, if that is indeed what happened to Shulkin.

The day after announcing he was replacing Shulkin, Trump told a rally in Richfield, Ohio, that he had been dissatisfied with efforts to improve the VA. Shulkin had enjoyed Trump’s support for much of his first year in the administration, but that eroded in February after mounting ethics questions and political infighting at the VA.

The back and forth over the circumstances behind Shulkin’s departure — and what it could mean for Wilkie’s status — comes as the nomination of Jackson is drawing concern among lawmakers and veterans groups. They worry the Navy rear admiral and lifelong physician lacks the experience to manage an enormous agency paralyzed over Trump’s push to expand private care.

Trump’s new Cabinet nominees also are beginning to pile up in the Senate, likely leading to weeks of confirmation battles and other delays in the run-up to congressional midterm elections in November. That could mean an extended reign for an acting VA secretary.

Shulkin had agreed to reimburse the government more than $4,000 after the VA’s internal watchdog concluded last month that he had improperly accepted Wimbledon tennis tickets and that his then-chief of staff had doctored emails to justify his wife traveling to Europe with him at taxpayer expense. Shulkin also blamed internal drama at the agency on a half-dozen or so rebellious political appointees, insisting he had White House backing to fire them.