Sikhs respond to shooting near Seattle with fear, disbelief 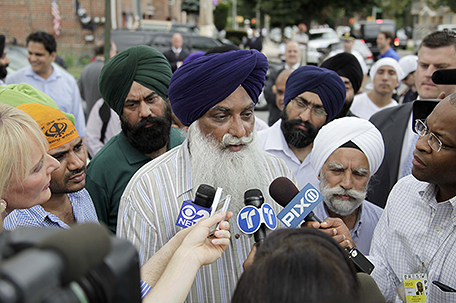 KENT, Wash. — Fear, hurt and disbelief weighed on the minds of those who gathered at a Sikh temple after the shooting of a Sikh man who said a gunman approached him in his suburban Seattle driveway and told him “go back to your own country.”

“Everybody who is part of this community needs to be vigilant,” Satwinder Kaur, a Sikh community leader, said as several hundred people poured into a temple in Renton for worship services about one mile from Friday night’s shooting.

“It is scary,” she added. “The community has been shaken up.”

Authorities said a gunman approached the 39-year-old Sikh man as he worked on his car in his driveway in the city of Kent, about 20 miles south of Seattle. The FBI will help investigate the shooting, authorities said.

Kent Police Chief Ken Thomas said Sunday the department is investigating the shooting as a hate crime. He said no arrests have been made yet after the victim was shot in the arm but that he did not believe anyone was in imminent danger.

“This is a top priority investigation, and we are doing everything possible to identify and arrest the suspect,” Thomas said in an email, adding that residents in the city of about 125,000 should “be vigilant” but also not let the shooting hurt their quality of life.

The FBI’s Seattle office said in a statement Sunday that it is “committed to investigating crimes that are potentially hate-motivated,” the Seattle Times reported.

The shooting comes after an Indian man was killed and another wounded in a recent shooting at a Kansas bar that federal agencies are investigating as a hate crime after witnesses say the suspect yelled “get out of my country.”

Friday night’s shooting was on the minds of many who gathered at a Sikh Temple in nearby Renton Sunday morning for worship. Women in colorful saris and headscarves and men wearing turbans sat on the floor on opposite sides inside the worship space.

As they entered and left the services, many expressed fear that one of their own was targeted and said they’re scared to go to the store or other public places. Some said they have noticed an uptick in name-calling and other racist incidents in recent months. Still others expressed hurt and disbelief at the lack of understanding and ignorance.

“Sikhism teaches about equality and peace,” said Sandeep Singh, 24. “It’s sad to see that’s what it has come to,” he said of the violence. “This is our country. This is everyone’s country.”

Gurjot Singh, 39, who served in the Marine Corps and is an Iraq war veteran, said he was dismayed that people think others who look different aren’t equal or don’t contribute equally to the community.

“This is equally my country as it is your country,” he said. “It doesn’t anger me. It hurts me.”

Hira Singh, a Sikh community leader, said there have been increasing complaints recently from Sikhs near Seattle who say they have been the target of foul language or other comments.

“This kind of incident shakes up the whole community,” he said, adding that about 50,000 members of the faith live in Washington state.

Kent Councilwoman Brenda Fincher went to the temple Sunday to show support for the community. “When a hate crime happens, we have to stand up and make sure everyone knows it’s not acceptable,” she said.

Kent police have not identified the man or released other information. But India’s foreign minister, Sushma Swaraj, identified the victim on Twitter early Sunday, saying, “I am sorry to know about the attack on Deep Rai, a U.S. national of Indian origin.”

She said she had spoken to Rai’s father, who told her Rai is out of danger and recovering in a hospital.

Rai told police a man he didn’t know came up to him Friday night and they got into an argument, with the suspect telling Rai to go back to his homeland. He described the shooter as 6 feet tall and white with a stocky build, police said. He said the man was wearing a mask covering the lower half of his face.

Sikhs have previously been the target of assaults in the U.S. After the Sept. 11, 2001, attacks, the backlash that hit Muslims around the country expanded to include those of the Sikh faith. Men often cover their heads with turbans, which are considered sacred, and refrain from shaving their beards.

In 2012, a man shot and killed six Sikh worshippers and wounded four others at a Sikh temple near Milwaukee before killing himself.

The Sikh Coalition, a national civil rights group, on Sunday said everything must be done “to confront this growing epidemic of hate violence.”

“We are all accountable for what happened in Kent, Washington on Friday night,” Jasmit Singh, a Seattle-area community leader, said in a statement.

Raj Singh Ajmani, who lives in Bellevue, said he was shocked by the shooting.

“When it happens in your own community, you realize the danger and the times we’re living in,” he said before heading to service. “Some people worry that more such violence will occur because of President Trump.”