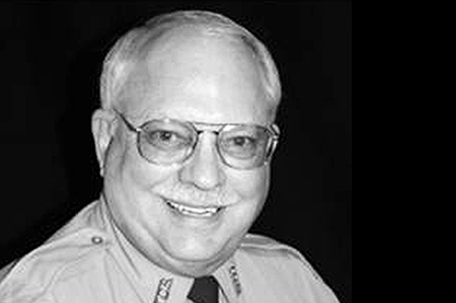 ABOVE PHOTO:  In this photo provided by the Tulsa County, Oklahoma, Sheriff’s Office is Tulsa County reserve deputy Robert Bates. Police say Bates, a 73-year-old white reserve deputy, thought he was holding a stun gun, not his handgun, when he fired at 44-year-old Eric Harris in an April 2 incident. Harris, who is black, was treated by medics at the scene and died in a Tulsa hospital.

OKLAHOMA CITY — The Tulsa County volunteer deputy who shot and killed a suspect after mistaking his handgun for a stun gun was using an unauthorized weapon when he fired the fatal shot, lawyers for the dead man’s family said Monday.

In separate news conferences, the county sheriff and lawyers for the man killed by 73-year-old Robert Bates disagreed on whether the reserve officer should have been on the streets with a badge and a gun.

Dan Smolen, a lawyer for Harris’ family, said the Tulsa County Sheriff’s Office violated a number of its internal policies by letting Bates carry his personal handgun after training at the range on another weapon. Smolen also said the department failed to keep a permanent record of Bates’ training, a violation of local policies.

Records Bates released during the weekend showed that the volunteer officer was trained on a .45, not the weapon used in Harris’ death.

“None of those that are approved by the sheriff’s office own policies include a .357 Smith and Wesson,” Smolen said, while reviewing department records for reporters.

“Firearms training is a critical piece of this story. None of the records produced by the Tulsa County Sheriff’s Office or Mr. Bates’ attorney, whoever produced them, indicate that he was ever certified with a .357 revolver,” Smolen said.

Harris died after running from a sting operation involving illegal gun sales. Bates, who has been charged with second-degree manslaughter, has said that he confused his handgun with his stun gun following a short chase.

The sheriff said it was proper to have Bates on the scene with eight other officers during an investigation into illegal gun sales.

“Mr. Bates has been to the range several times and is qualified, and that is documented,” the sheriff said.

Smolen reviewed documents Bates released showing passing scores at the shooting range, though some efforts were marked below the 72 percent passing grade.

Using a slideshow, he said Tulsa sheriff’s department policies require that guns used on-duty be the same as those used at the range, unless an officer is off-duty before being called to respond.

State law enforcement training standards do not require that the weapons be the same, but do allow counties and local police to set their own guidelines.

Under those same state standards, once people are certified as law officers they remain authorized to work as long as they maintain weapons skills and aren’t de-certified for reasons as varied as being convicted of major crimes or involuntarily committed to a mental health facility.

“Whether they are hired by a particular department or meet that department’s requirements … that is up to the individual department, not CLEET,” said James Wilson, the general counsel for the Council on Law Enforcement Education and Training. “If the Tulsa County Sheriff’s Office wants to commission them, that’s their business, as long as they’re certified.”

Bates, who sold his insurance business for $6 million in 1999, was trained to be a Tulsa Police Department patrolman in 1964 but left in 1965. He was out of law enforcement for 35 years, returning for volunteer work in Florida in 2000-01 — doing ride-alongs — before joining the Tulsa County force in 2008 and making a number of donations to the agency. He also was Glanz’ campaign manager during the 2012 election.

There was no record of why Bates left the Tulsa Police Department. The agency said it destroys old personnel files after five years.

Glanz’ office has said it, too, cannot find all of Bates’ records. Monday, Glanz said some of those records could have been destroyed under a new state law that allows agencies to throw away old records after seven years.

“I don’t doubt for a second that they can’t find these records,” said Sen. Brian Crain, a Republican from Tulsa who sponsored the bill. “It’s a bureaucracy, and with any bureaucracy you’re going to lose track of some records.” He said he couldn’t recall if it was Glanz or the state Sheriffs Association that asked for the bill.

Glanz, the local sheriff since 1989, was on the Commission of Accreditation for Law Enforcement Agencies from 2000 to 2005 and said he believed that age standards may be considered in response to Harris’ death.

But Craig Hartley, CALEA’s executive director, said Monday no one has asked for a review, and any mandatory retirement age might not survive a federal court challenge under equal employment laws.

Glanz also said Monday that action will be taken against two deputies at the scene, including one caught on video cursing at Harris as he lay dying. The sheriff said both have received threats and have been reassigned.

“We will review what those officers did and will take some administrative action,” the sheriff said, but didn’t provide specifics.

The FBI said Monday it had concluded that a civil rights investigation into Harris’ death was not warranted “at this time.”

The Tulsa World newspaper, citing unidentified sources, has reported that some of Bates’ supervisors were told to certify him after he failed to meet some qualifications. Bates released his records Saturday in an effort to refute that claim.

The reporter and editor on the Tulsa World story have resigned “to pursue other opportunities,” the newspaper said on its website. Another reporter also leaving the paper said the departure had been in the works for weeks, even before Bates shot Harris.

“We always intended to give notice this week,” said former World reporter Cary Aspinwall, who is married to an AP reporter. “This all happened before he shot the guy.”