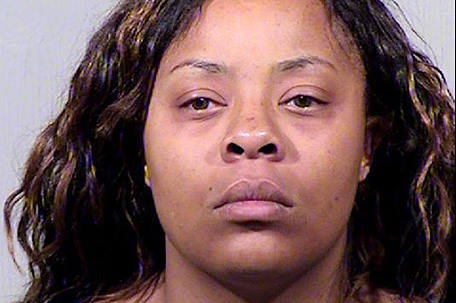 Despite efforts to help her keep custody of her children, Shanesha Taylor has lost her supporters and lawyers.

Media sources report that money raised from an online campaign for Taylor is not there. As a result, supporters for the single mother have quit helping her. Prosecutors in Taylor’s case note that she has spent over $4,000 each month on non-essentials.

Speaking with Phoenix, station FOX 10, the Rev. Jarrett Maupin cited Taylor’s spending habits as the reason why he withdrew his support.

“We had someone call my office and alert her attorney to the fact that she spent $6,000 at a music studio in Tempe to finish her baby daddy’s rap album,” said Maupin, who added that Taylor also spent money on designer items. “That’s not what people gave her that money for.”

“I feel bamboozled and used a little bit, but I don’t regret it because on its face she was what she was,” Maupin continued while noting that Taylor may have used up her support money. “Everyone had sympathy for her, but what she’s become is something quite different.”

The loss of her supporters is the latest development involving Taylor, who generated headlines earlier this year for leaving her kids in a hot car during a job interview upon having nowhere to leave the children. The online campaign for Taylor, which was organized after her story went viral, raised up to $114,000. According to reports, the money was set up to be used for a $40,000 trust fund for the children

In order to avoid serving time on child neglect charges, Taylor agreed to put $60,000 of the money into the trust fund. However, Taylor had not deposited any of the money, as of October. As a result, prosecutors worked with Taylor as they reportedly agreed to require $30,000 for the trust fund, instead of $60,000.

Nevertheless, Taylor claimed that the money wasn’t put into the trust because her children won’t get the money if they decide not to go to college. As it stands now, Taylor faces up to 18 months in jail for felony child abuse.

To make matters worse,  the lawyers are dropping her case. Taylor’s attorney, Benjamin Taylor mentioned to the judge in the case that he had an “ethical” conflict with Shaneesha Taylor, while her other lawyer, John Agra, said that the client failed to pay him.

In Taylor’s eyes, Shaneesha Taylor has thrown away the “deal of a lifetime.”