Sen. Manchin: Why be a slave to corporations rather than be free to serve your people?’ asks the Poor People’s Campaign 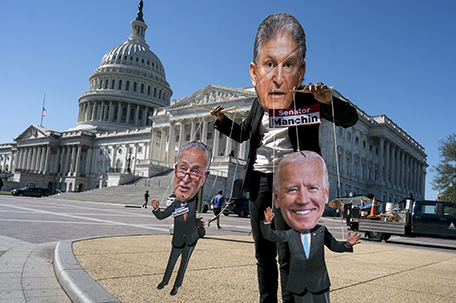 Poor and low-income people and faith leaders from West Virginia called out their senator, Joe Manchin, for insisting on cuts to the Build Back Better plan that will hurt them and the state during a rally last Sunday sponsored by the  Poor People’s Campaign: A National Call for Moral Revival.

“We are lifting our voices and we’ve got them nervous,” Pam Garrison, tri-chair of the West Virginia Poor People’s Campaign, said at the rally in Charleston. Speaking to Sen. Joe Manchin, she continued, “I am not a liberal, I am not a conservative, I am an American. If you are not for your country, for the people, then you’re against us. We are a mighty force. Together as one, we can move mountains.”

“The question is not how much will it cost if we do this, it’s how much will it cost if we don’t? Our best economics have taught us that investments in people are investments in democracy. A democracy is supposed to ensure the corporations are not treated like people, and people are not treated like things. … Why is it so hard, Sen. Manchin, to tell the truth and care?,” asked Bishop William J. Barber II DMin., co-chair of PPC:NCMR.. “Why put corporate favors over your conscience, senator? Why be a slave to the greedy rather than serve your people? Don’t you know you’re the senator from West Virginia and Mountaineers are supposed to always be free? Why not help your people?”

“We’ve heard today that West Virginia can’t take any more loss,” said Rev. Dr. Liz Theoharis co-chair of the PPC:NCMR. “This beautiful, this majestic state of West Virginia knows too much about being a canary in the coal mine. … If Sen. Manchin votes against the will of his own constituents…West Virginia will be hurt more than almost anywhere.”

Many speakers called attention to Manchin’s framing of the legislation.

“Sen. Manchin said this bill was reckless,” said Mavery Davis, a community Organizer in Charleston. He said that we are reckless to want this type of advancement. I’m telling you right now, Joe, that 80% of West Virginians support this legislation. So what are you doing? Is it reckless to want 17,000 new jobs? Is it reckless to want universal Pre-K? Is it reckless to want an expanded child tax credit? NO! It is not reckless. What is reckless is serving corporations that pay into your political campaign…neglecting us, the people here that go to get up every day and watch our neighbors suffer everyday because you want to support your friends for a dollar…It’s the people that put you in office and we will vote  you out!”

Radio host Mark Thompson spoke at length about a saying about the people of West Virginia that states “Mountaineers are always free.”